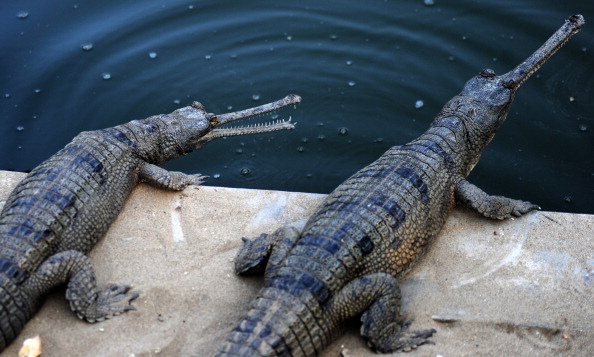 Gharial crocodiles are seen at a reptile farm in Chitwan National Park, around 200 kilometres southwest of Kathmandu, on December 27, 2011. (Prakash Mathema/AFP/Getty Images)
Environment

Endangered Gharials Tagged To Save Species

In an initiative to restock the numbers of critically endangered (CR) Gharials (Gavialus gangeticus) in the wild, six captive-bred gharials have been satellite-tagged and released into the the River Gandak, bordering the Valmiki Tiger Reserve in Bihar. This is the first time that the rare species have been satellite-tagged. The program was undertaken by the Bihar Forest Department in collaboration with the Wildlife Trust of India (WTI). The six gharials sourced from Sanjay Gandhi Biological Park, Patna included five females and a male.

Gharial (Gavialus gangeticus) is listed as a Critically Endangered species in the IUCN Red List and under ‘Schedule I’ of Indian Wildlife (Protection) Act. These reptiles are often confused with crocodiles but are in fact the only survivors of Gavialiade family from the great reptilian age. Their snout (a bulbous appendage), which is shaped like a pot, (called a ghara in Hindi) is what gives them their name. This adaptation helps the gharial swim underwater and breathe easily just by keeping the snout above water. They can grow up to six meters in length and weigh up to 160 kg and are recognized as keystone species in their environment due to the role they play in maintaining the prey-predator balance in the river ecosystem.

There was a time when Gharials were commonly found in the Indian subcontinent but now the species is found only in India and Nepal and here too there has been a drastic drop in their numbers – 96 percent over the last 70 years.

The current population of gharials is less than 200 mature individuals in India and less than 35 in Nepal, and seemingly extinct in Pakistan, Bangladesh and Bhutan.

Experts believe habitat alteration, fishing, agriculture, grazing, poaching of crocodiles and their eggs are some factors that are threatening gharials. While efforts have been made to breeding them in captivity, the results have not been very successful. It is hoped that satellite tagging of the species might help track them and understand better the challenges these animals face in the wild. If this program proves to be fruitful, it could be replicated in other rivers of Bihar too.

A chance to thrive

BC Choudhury, Senior Advisor, WTI, under whose guidance the tagging and restocking happened, said,

“Restocking of gharial is not new, what is new is tagging and restocking gharial with satellite tag which is first for India and also for the species. India’s gharials conservation program was initiated from a clutch of eggs originating from River Gandak in early 1970s. Now returning them back to the wild is the program coming full circle.”

“Gharials present another opportunity for India to showcase its leadership in wildlife conservation; that conservation is more than charismatic mammals like tigers and elephants. These reptiles are at greater risk of extinction, and we are proud to be associated with their revival efforts.”

Surveys by various agencies and a Rapid Action Project supported by WTI determined that there were around 20-25 gharials in the River Gandak and there was a stretch which could be an ideal release site for the tagged gharials.

“In Bihar, gharials have been seen only in the River Gandak and at some stretches of River Ganga. To select the most suitable and safe release site for the gharials, we conducted a survey and identified few locations based on characteristics such as river channel, bank substratum and anthropogenic influences at such locations. A long stretch of the River Gandak in its upper reaches is less disturbed as it falls within Valmiki Tiger Reserve (Bihar) and Sohagi Barwa Wildlife Sanctuary (Uttar Pradesh). So, we selected this stretch as the release site.”

According to Hindu mythology, Gharial, is revered as the vehicle (vahana) of Ganga (River Deity) and Varuna (God of winds). Traditionally the animal has been identified with water, the source of all existence and fertility. Hopefully the tagging project will help increase the knowledge about these animals and restore their numbers in India.