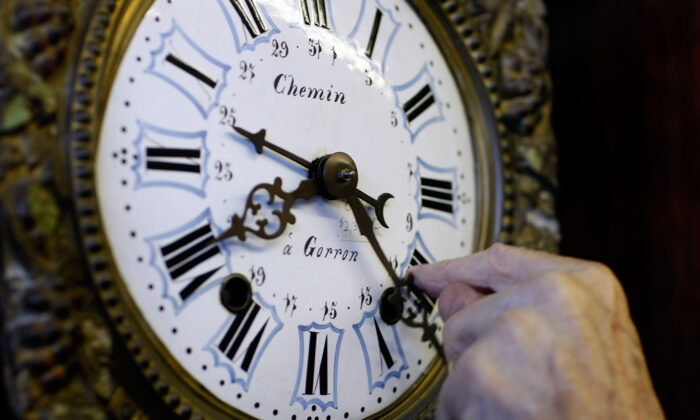 Howie Brown adjusts the time on a clock back one hour for the end of day light savings time at Brown's Old Time Clock Shop in Plantation, Fla., on Nov. 2, 2007. (Joe Raedle/Getty Images)
US

End of Daylight Saving Time Means Winter Is on the Horizon

WASHINGTON—Winter is on the horizon again with the end of daylight saving time coming Sunday across most of the United States.

Standard time begins at 2 a.m. local time Sunday. Set the clocks back an hour before bed Saturday night and gain an extra hour of sleep. Going forward, it will be lighter earlier in the morning but will grow darker earlier in the evening.

But a recent poll shows that most Americans want to avoid switching between daylight saving and standard time, though there is no consensus behind which should be used all year.

The poll from The Associated Press-NORC Center for Public Affairs Research finds only 25 percent of Americans say they prefer to switch back and forth between standard and daylight saving time, when the sun rises and sets one hour later in the summer than it would during standard time.

Forty-three percent of Americans say they would like to see standard time used during the entire year. Thirty-two percent say they would prefer that Daylight Saving time be used all year.