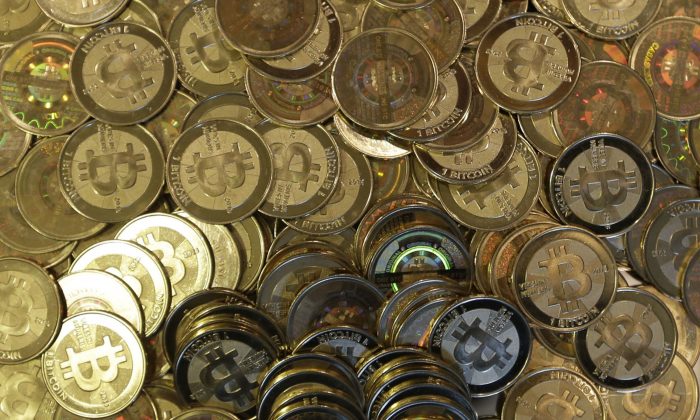 The exchange’s CEO Mark Karpeles appeared before Japanese TV news cameras, bowing deeply. He said a weakness in the exchange’s systems was behind a massive loss of the virtual currency involving 750,000 bitcoins from users and 100,000 of the company’s own bitcoins. That would amount to about $425 million at recent prices.

The online exchange’s unplugging earlier this week and accusations it had suffered a catastrophic theft have drawn renewed regulatory attention to a currency created in 2009 as a way to make transactions across borders without third parties such as banks.

It remains unclear if the missing bitcoins were stolen, voided by technological flaws or both.

“I am sorry for the troubles I have caused all the people,” Karpeles, a Frenchman, said in Japanese at a Tokyo court.

Karpeles had not made a public appearance since rumors of the exchange’s insolvency surfaced last month. He said in a web post Wednesday that he was working to resolve Mt. Gox’s problems.

The loss is a giant setback to the currency’s image because its boosters have promoted bitcoin’s cryptography as protecting it from counterfeiting and theft.

Bitcoin proponents have insisted that Mt. Gox is an isolated case, caused by the company’s technological failures, and the potential of virtual currencies remains great.

Debts at Mt. Gox totaled more than 6.5 billion yen ($65 million), surpassing its assets, according to Teikoku Databank, which monitors bankruptcies.

Just hours before the bankruptcy filing, Japanese Finance Minister Taro Aso had scoffed that a collapse was only inevitable.

“No one recognizes them as a real currency,” he told reporters. “I expected such a thing to collapse.”

Japan’s financial regulators have been reluctant to intervene in the Mt. Gox situation, saying they don’t have jurisdiction over something that’s not a real currency.

They pointed to the Consumer Affairs Agency, which deals with product safety, as one possible place where disgruntled users may go for help.

The agency’s minister Masako Mori urged extreme caution about using or investing in bitcoins. The agency has been deluged with calls about bitcoins since earlier this year.

“We’re at a loss for how to help them,” said Yuko Otsuki, who works in the agency’s counseling department.

It’s hard to know how many people around the world own bitcoins, but the currency has attracted outsize media attention and the fascination of millions as an increasing number of large retailers such as Overstock.com begin to accept it.

Speculative investors have jumped into the bitcoin fray, too, sending the currency’s value fluctuating wildly in recent months. In December, the value of a single bitcoin hit an all-time high of $1,200. One bitcoin has cost about $500 lately.

Roger Ver, a Tokyo resident who has provided seed capital for bitcoin ventures such as Blockchain.info, a registry of bitcoin transactions, said he believes bitcoin will survive, possibly emerging with better technology that’s safer for users.

He said Mt. Gox people were likely sincere but had failed to run their business properly.

“Mt. Gox is a horrible tragedy. A lot of people lost a lot of money there, myself included,” he said ahead of the bankruptcy filing. “I hope we can use this as a learning experience.”

Some countries have reacted sternly to bitcoin’s emergence, but many people remain fans of its potential.

Vietnam’s communist government said Thursday that trading in bitcoin and other electronic currencies is illegal, and warned its citizens not to use or invest in them.

Late last year, China banned its banks and payment systems from handling bitcoin, although people still use them online. Thailand earlier put a blanket prohibition on using bitcoins and Russia has effectively banned them.

There was still considerable appetite for bitcoin in China, where it has become attractive as an investment since tightly-regulated state banks offer very low interest rates on deposits.

Even some with money tied up in Mt. Gox were undaunted.

“Actually this money itself is the benefit from bitcoin investment,” said Huang, who plowed 10,000 yuan into bitcoins about three months ago.

“If it is legal, I will continue to invest for sure as it is the trend in the world.”

In Singapore, Tembusu Terminals, a joint venture specializing in crypto-currencies, announced Friday its first bitcoin ATM in the city-state and plans for many more. In Hong Kong, a group opened what it said was the world’s first bitcoin retail store.

Yang Weizhou, analyst at Mizuho Securities Co. in Tokyo, said laws to regulate virtual currencies may have to be created by countries including Japan.

She said lawsuits from those who lost money were likely, and any court rulings would chart unexplored territory and help define the reach of virtual money.

The trend toward such technology for peer-to-peer payments wouldn’t replace traditional money but was here to stay because of its convenience, she said.

“It is undeniable,” she said. “One must separate the Mt. Gox problem from the overall concept.”