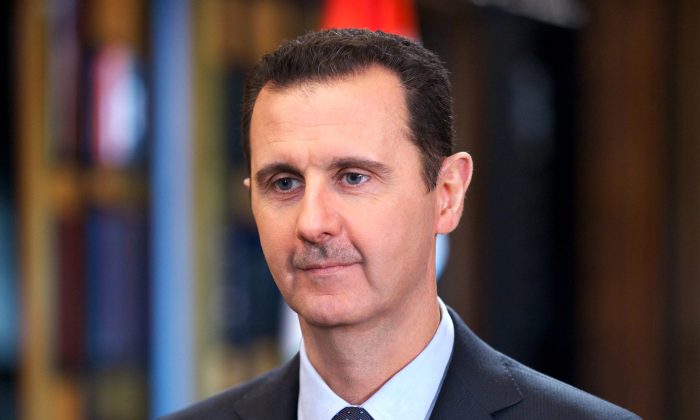 Syrian President Bashar Assad speaks during an interview with Venezuela's state-run Telesur network, in Damascus, Syria, on Sept. 25, 2013. Syrian President Bashar Assad is taking advantage of the US-led coalition's war against the Islamic State group to pursue a withering air and ground campaign against more mainstream rebels elsewhere in the country, trying to recapture areas considered more crucial to the survival of his government. (AP Photo/SANA)
Middle East

End Game Against ISIS Will Require Departure of Assad

The policies of Syrian President Assad and his regime created the conditions of civil war and state failure on which ISIS has thrived. In the long run, there will be no final defeat of ISIS or other violent extremist groups that prey on extreme popular discontent until he is removed, and a new inclusive order is put in place in Damascus. Ironically, the rise of the Islamic State and entry into the war of the United States and its allies is creating new conditions and calculations on the ground and could create the political conditions for a final settlement of the Syrian crisis.

War is the continuation of politics by other means. Regrettably, attempts at transition and power sharing deals for Syria failed in the Geneva meetings of June 2012 and January 2014, and the war raged on with horrific consequences for the Syrian people. The simple reality that no political resolution was possible without the removal of a divisive leader was recognized in Iraq; the U.S. demanded that Prime Minister Nouri al Maliki be replaced and a power-sharing government be put in place prior to fuller U.S. and allied engagement.

U.S. officials should keep emphasizing that the conditions that have enabled the rise of ISIS were created by the brutal and divisive policies of the Assad regime, and that Washington and its allies are as serious about pushing for a power-sharing transition in Damascus as they are about fighting ISIS. It is also important to reassure the moderate Syrian opposition as well as America’s regional allies that while the U.S. is engaged in the fight against ISIS, it recognizes the original source of the calamity in Syria and is committed to bringing about political transition and power-sharing in Damascus.

As the U.S. and its allies deepen their engagement in Syria and ramp up their support for the moderate rebels, this will cause great concern for the Syrian regime’s supporters and allies. Six months ago, the regime and its allies were quite content that they had split the opposition, beaten back the core challenge to the regime, quarantined Syria from direct external intervention, imposed a new balance of power in the country in their favor and could wait out the crisis indefinitely. Now they have to contend not only with a surging ISIS but the prospect of a reviving moderate opposition backed by U.S. airpower and the majority of regional states.

Paul Salem is vice president for policy and research at The Middle East Institute. He focuses on issues of political change, democratic transition, and conflict, with a regional emphasis on the countries of the Levant and Egypt.