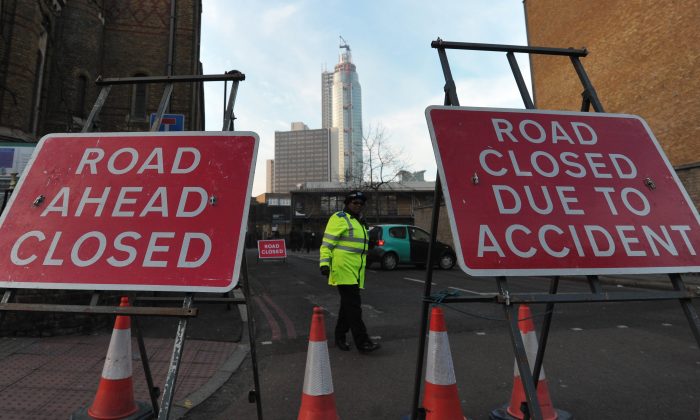 UK charity RoadPeace says victims of road crashes are not getting the support they deserve in comparison to victims of other crimes. (Carl Court/AFP/Getty Images)
Europe

More fixed penalties and increased fines for careless driving have been introduced by the government, but a UK charity says victims of road crashes are not getting the support they deserve in comparison to victims of other crimes.

RoadPeace – a charity for those bereaved or injured in road crashes in the UK and for people concerned with road danger – has designated August “National Road Victim Month”. It is calling for further changes to support road crash victims and their families.

“Less support and information is provided to families bereaved by drunk or speeding drivers than to families of homicide victims,” RoadPeace said in a statement. “It is even worse for the injured.”

The charity says that increasing fines is not enough, and that road crime should be treated as real crime.

“More than just the fine needs to change. The greatest threat of being hurt by someone else is when they are driving a motor vehicle,” said the Chair of RoadPeace, Cynthia Barlow, in a statement.

“Whilst the police and DfT [Department for Transport] can do more to prevent crashes, the victims of those that are not avoided deserve much better treatment from the Ministry of Justice.”

In the new government measures announced on August 16th, motorists seen tailgating or wandering over lane markings can be given on-the-spot fines of £100 with 3 points on their driver’s licence.

Using a mobile phone while driving or not wearing a seatbelt will also incur a fixed penalty of £100 to bring them in line with fines for similar fixed penalties for non-motoring offences.

The government’s measures are meant to free up police to deal with court processes involving more serious driving and other crime.

“Careless driving puts innocent people’s lives at risk,” Road Safety Minister Stephen Hammond said in a statement. “That is why we have made it easier for the police to tackle problem drivers by allowing them to immediately issue a fixed penalty notice for low level offending rather than taking these offenders to court.

“We have also increased penalties for a range of driving offences to a level which reflects their seriousness and which will ensure that they are consistent with other similar penalty offences.”

In its response to the consultation “Getting it right for victims and witnesses”, the Ministry of Justice stated: “We acknowledged in the consultation document there more could be done to support victims of road traffic crime. There was strong support for immediate assistance to be made available to those bereaved by fatal road accidents and those seriously injured on the roads.

“We remain of the view that more can be done to support victims of road traffic offending who meet our criteria for prioritisation and we will work with stakeholders to identify and examine the options for doing so.”

But they concluded, “We do not consider it feasible to extend coverage broadly to anyone bereaved through a road traffic accident or seriously injured by one.”

Firstly, there is a need to treat those bereaved and injured in road crashes as victims of crime, until the contrary is proven.

Secondly, where drivers break the law and there are victims, the victims should be noted in crime statistics. Those killed by drunk drivers or other law-breaking motorists are not counted at present.

Road crash locations also need to be put on crime maps. Current crime maps focus on property, which “can be replaced, unlike loved ones”, says RoadPeace.

Finally, RoadPeace requests that road incidents stop being referred to as “accidents”. The word “crash” leaves responsibility open while “accident” suggests no culpability.

Lord Digby Jones, a previous director of the Confederation of British Industry, is also concerned about the lack of public outcry over road deaths and injuries, despite their prevalence.

“When there is a major train or plane crash with vivid images, many tragic deaths and lurid, heart-stopping headlines, we all count our blessings, hug our loved ones ever closer and discuss it over our next coffee break,” he said in an email.

“Often we conclude ‘human error’ or ‘something must be done’… and get on with our lives, yet, we do not see deaths on the road, one here, one there, as warranting the same reaction or attention.

“Because the one-off is so shocking, because familiarity with road crashes breeds complacency, we have stopped caring,” he said.

RoadPeace has designated August as National Road Victim Month after Diana, Princess of Wales, was killed in a crash in 1997.

She was killed on August 31st, the same day as the world’s first motor vehicle victim, Mary Ward, was killed in Ireland in 1869.

Britain’s first road death also occurred in August, when Bridget Driscoll was killed in Crystal Palace on August 17th, 1896, with the coroner pronouncing “this must never happen again”.