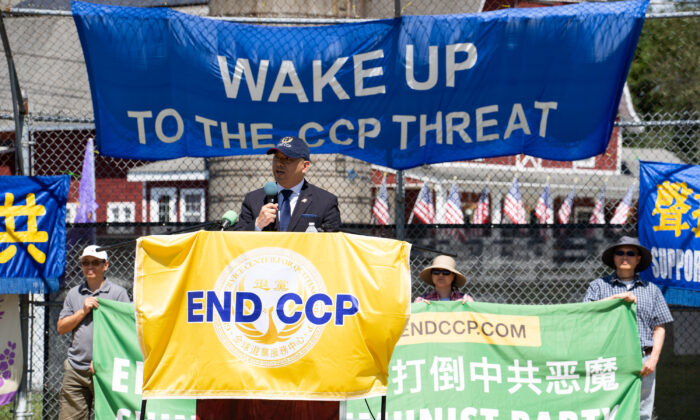 OTISVILLE, N.Y.—The Chinese Communist Party (CCP) has infiltrated the United States to an alarming degree, not just to steal economic and military secrets, but also to expand divisions, finagle, and sway Americans’ opinions, attendees were told at a rally dubbed “Wake Up to the CCP Threat” in New York state.

Resisting the CCP’s plan to bring the United States to its knees presents a rare opportunity of common ground for Americans of varied political stripes to unite, speakers at the rally said, urging people to spread the word and engage civically.

“The CCP aims to bring down America in a very comprehensive multi-domain warfare,” said Sean Lin, a former U.S. Army virologist and member of the Committee on the Present Danger: China.

The last of those categories especially plays into Lin’s expertise. He noted how the CCP blocked and manipulated research into the origins of the COVID-19 pandemic that started in Wuhan, China, in 2019, so there’s no way to say definitively how it started.

He pointed out that various types of “gain-of-function” viral research continue in China, and the CCP persists with biological warfare projects. The People’s Liberation Army (PLA) is currently working on a “level four” bio-containment laboratory in cooperation with Pakistan’s army, he said.

“There’s no famous research institute in Pakistan for any infectious disease. Why does PLA want to collaborate with the Pakistan army to have a P4 lab there? Because next time, if another outbreak happens, Pakistan is to blame, not the CCP. This is their strategy,” he said.

“If our enemy is waging an unconventional war against us, if we still think the CCP is just a competitor or a collaborator, we will lose the war,” he said.

The way to resist CCP influence in the United States is through strengthening core American values as well as becoming active in the political realm, said Rev. Bill Banuchi, head of the New York Faith and Freedom Coalition.

“I have two grandchildren now, and I rue the day when I will have to sit down with them and tell them what it was like in America when we knew freedom,” he said.

He encouraged Americans not just to vote, but also to consider running for office, whether for a school board, a municipal council, or a county legislature.

He noted that Americans, who come from varied ethnic and cultural backgrounds, find their unity in the belief in the nation’s founding values, in that “in this nation, our rights do not come to us from Washington, D.C., or from Albany, our rights come to us from the very hand of God.”

“When an outside force comes to threaten us, what do we do? We forget our internal squabbles and we lock arms and we join ranks against that outside enemy,” he told a cheering crowd of about 120 people.

The rally in Otisville, New York, was sponsored by the local Mount Hope Chinese Association and the New York-based Global Service Center for Quitting the CCP.

Robin Imbarrato, 52, came after her father told her about the rally, she said, so she could stay educated on the topic.

“Communism is now becoming part of our world, it’s infiltrated here,” she told The Epoch Times. “That’s why I came, to see what I can do possibly to combat it.”

It was “a big eye-opener,” she said, when the COVID-19 pandemic came and U.S. authorities to a large degree followed the type of response proscribed by the CCP, including business shutdowns and mandates.

Another participant, James Snyder, 32, said he came to “support the cause.”

“I don’t enjoy the way I observe the CCP’s tendrils infiltrating our media, government, and social media—our society as a whole,” he said.

He started to look into CCP influence in America in 2016 after hearing then-candidate Donald Trump repeatedly bringing up China in his campaign speeches.

He began to wonder, “What is the big deal about China’s Communist Party?”, and over time, he learned more by remaining “plugged into alternative news sources” and staying away from mainstream news sources.

He noted that more and more athletes and entertainment conglomerates were censoring themselves in order to appease the CCP and be allowed to reach the Chinese audience.

“I’ve noticed these things just a little bit at a time. And the more I notice it, it becomes harder and harder to ignore,” he said.

For Howard Bellingham, 37, the “wake-up” point came last year when he saw former professional wrestler John Cena apologize to China for calling Taiwan a country in a promo video for the ninth installment of the “Fast and Furious” movie franchise.

He then started to look into China’s economic influence, noticing that U.S. corporations are becoming increasingly beholden to the Chinese market.

“[It used to be] they’d have a stake in the community, they’d have an interest in people coming to their business,” he said.

But the proliferation of online shopping, in his view, has divorced U.S. businesses from their domestic clientele.

“China’s got a billion people, we have 330 million. Which market is going to command the authority there?” he said.

He said it was encouraging to see so many people show up for such an event in a small town.

“It’s easy—you don’t see it on mainstream news—to think that you’re by yourself with your thoughts on stuff like this,” he said.

“So when you come out to an event like this and you see a whole lot of people who are here for the same reasons, who think the same things, and want to learn about the same subject, it lets you know that you’re not alone, that people do care, that the community does exist, that we just got to dig through the dirt to find it again.”

Correction: A previous version of this article incorrectly spelled the name of Bill Banuchi. The Epoch Times regrets the error.