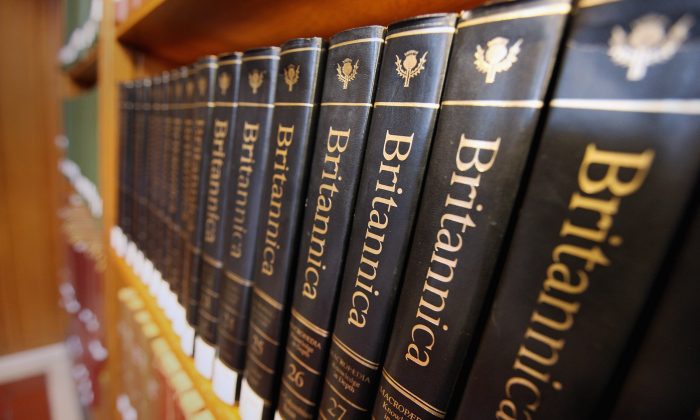 Encyclopedias tend to shrink the past, revealing a society's limited understanding of the world

The concept of an encyclopedia was invented to offer a comprehensive, yet relatively compact collection of truths that scholars could offer about the world in which the authors and readers live. With some regularity, new compilers create new encyclopedias. In effect, they offer an update or, more accurately, a revision, since old truths often seem to disappear in newer encyclopedias.

Encyclopedias are in fact historical documents of the era in which they were compiled. We can learn much about the evolution of the world’s institutions and modes of thinking by using encyclopedias as an historical tool. Not only containers of different truths, they enable systematic comparison among diverse eras and language communities.

The latest twist on encyclopedias is Wikipedia—which permits, indeed invites, immediate, constant revision by readers, turning truths into a truly ephemeral reality. Furthermore, there are multiple Wikipedias in different languages.

The pace of change in our world has become extreme. Debate about what is happening, the explanation of why, and the expected outcomes over the coming decades is intense. In this intellectual turmoil, there’s quarrel about descriptive names. In fact, such names do matter since these frame the discussion, pushing us to see some truths and miss others.

There was a time not so long ago when, in our discussions about world affairs, we spoke about “development.” It’s almost forgotten now that the United Nations designated the 1970s as the “decade of development.” Later, we began to speak instead about “globalization,” something supposed to be new, good, and inescapable.

Then many people began to contest whether globalization was new or good or inescapable. Some called for “alter globalization,” that is, alternative paths to achieving the good society. In 2008 there was a noticeable major happening, collapse of the U.S. housing market in the United States, causing a “recession” that spread across the world. The search began for an explanation and remedy. There was also a search for a descriptive category to analyze what was happening.

A clear winner in the last five years has been “global studies.” In 2012, Sage published a four-volume, 2,072-page Encyclopedia of Global Studies. In its introduction, the editors say the encyclopedia “has been created to be the standard reference work for the emerging field of global studies … [to] analyze all aspects of the global and globalizing world.” Although some argue, the editors say, that global studies are new, most think these have a long history. The list of categories that the editors selected, informed by workshops with scholars and advisory committees, resulted in more than 300 entries, many related.

In perusing these items, one comes across unexpected topics. Some topics, associated with a particular scholar, written by that scholar, offer a useful short summary of the author’s work and material well known to scholars in the field that may serve as introductions for undergraduates.

In asserting the encyclopedia’s “new ground,” the editors argue that it covers topics “in a systematic and comprehensive fashion from the specifically global perspective.” The advantage of the term “global studies” is that it is inclusive and comprehensive. However, at the same time, the term lacks clear direction. This can be measured by comparing this encyclopedia both to one published in 1968 and a 2012 “handbook.”

In 1968 a 15-volume International Encyclopedia of the Social Sciences was published to great acclaim. Its editor asserted, “The major aims of this encyclopedia are to reflect the rapid development of the social sciences throughout the world.”

An immediate striking difference is that the 1968 encyclopedia is “international,” not “global.” More important, in its coverage, the 1968 encyclopedia was about the changing social sciences, as informed and affected by changing world realities. The 2012 encyclopedia is about changing world realities, as informed and affected by changing social science. In 1968, social science was riding the crest of its influence and legitimacy, and the editor takes efforts to show the ways in which this was so. He could not know that, fortuitously, the world revolution of 1968 would soon diminish and constrain this role.

From the Ground Up

The 1968 encyclopedia was itself successor to another 15-volume Encyclopedia of the Social Sciences, published in 1930–1935. Alvin Johnson, in 1968 the nonagenarian surviving associate editor of the earlier encyclopedia and honorary editor of the 1968 one, said, “I have always held that an encyclopedia, particularly one of the social sciences, should remain a historical document of its time and that each generation should have an encyclopedia—new from the ground up.”

This wisdom might suggest that had the two encyclopedias been written in the same spirit, the historical moments were still different. Just one example, the 2012 encyclopedia has entries for “American revolution” and “French revolution” but none for the Russian or Chinese revolutions. One cannot imagine a 1968 encyclopedia of global studies making such a choice.

Other entries would not have been made earlier: animal rights, offshore banking, gay and lesbian movement, Internet, Tobin Tax. When another encyclopedia is issued in 2040, how many present entries will disappear? Some of these definitive entries may seem invalid in another year or two.

Claiming to be the standard reference work is a risky game. Yet this 2012 encyclopedia does serve as a document that will be treasured by future historians looking back at this moment.

Could today’s issues be framed differently right now? To answer that, I turn to a handbook and not an encyclopedia. Handbooks are usually single volumes and contain articles, not categories. But this handbook—Routledge Handbook of World-Systems Analysis—is equally about the contemporary world in the light of the historical past. The editors claim it’s different in that it was compiled from the bottom up. They appealed to “the community of world-systems scholars” to offer papers and chose 80.

They claim, as do the editors of the 2012 encyclopedia, to be broadly inclusive and without “a single body of theory.” Other claims: that “world-systems analysts interpret human worlds as whole systems … [doing this] with a sense of historical depth”; that there is a “close link between world-systems analysis and social and political activism”; and that the entries share certain qualities in that “They are globally aware and are particularly sensitive to global hierarchies. … They read and cite the scholars from multiple disciplines. They take history seriously. … In this collective space we study the world in order to improve it.”

In many ways the handbook is closer to the 1968 encyclopedia in being an analysis of social science, as informed by the changing world rather than the other way around. It differs from the others in asserting outright its links with activism.

Libraries may contain all of these works, and indeed the original 18th-century encyclopedia of Denis Diderot and Jean le Rond d’Alembert. Little seems to be “definitive,” but much can be learned by using these documents, provided scholars approach each with skepticism about what the editors promise.

Immanuel Wallerstein is senior research scientist in sociology at Yale University. He is the former president of the International Sociological Association. Among the book he has authored is “Utopistics, or Historical Choices for the Twenty-first Century.” © 2015 YaleGlobal Online and the Yale MacMillan Center.