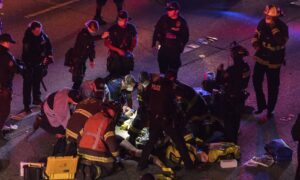 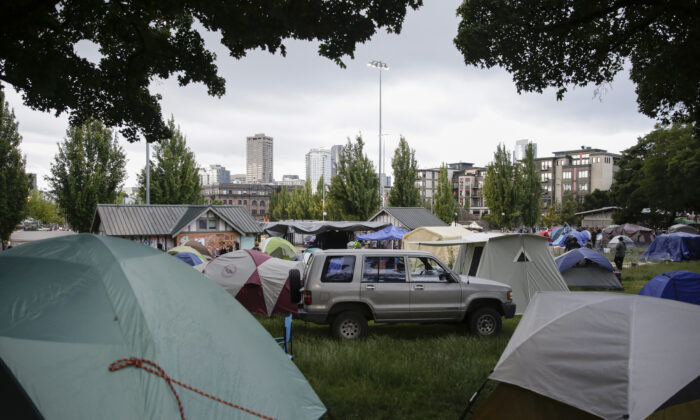 Tents are pictured in Cal Anderson Park in an area being called the Capitol Hill Autonomous Zone in Seattle, Wash., on June 12, 2020. (Jason Redmond/AFP via Getty Images)
US News

A community college located in the center of Seattle’s Capitol Hill neighborhood found itself increasingly troubled by a growing encampment on its lawn, formed by a mix of homeless people and Black Lives Matter activists.

Started as a small collection of tents and tables, the encampment has taken shape on Seattle Central College’s (SCC) south lawn in the week following Mayor Jenny Durkan declaring the self-proclaimed police-free zone—known as the Capitol Hill Autonomous Zone (CHAZ)—an unlawful assembly and ordered its dispersion.

A camper named Aaron Hall told local outlet KOMO News that they are part of the Black Lives Matter protest and moved in after they were evicted from Cal Anderson park, which happened about the same time Seattle police cleared out the CHAZ.

In a July 15 letter to the campus community, SCC president Sheila Edwards Lange called what seems to be a successor of CHAZ “an escalating safety situation,” voicing crime and health concerns.

“Seattle Central College supports the exercise of free speech, and we stand in solidarity with the protests against police brutality and in support of Black Lives Matter,” Lange wrote. “Our South Plaza is, in fact, officially a protest area. But it is not a designated camping ground or a shelter space.”

Lange described in her letter a “settlement of tents and awnings on that site,” which continues to grow in size with its tenants taking on an “aggressive and intimidating posture.”

“Vehicles are illegally driving and parking on sidewalks and on the brick area of our plaza. Some of the people in the encampment are intimidating people passing by, farmers market patrons, and employees at the college,” she wrote. “Firearms have been openly brandished; guns on campus are strictly prohibited even for those who have a permit for a concealed weapon. In addition, an increasing amount of human waste is posing a health hazard for the area.”

Lange noted that SCC had succeeded in resolving a similar situation in 2011 amid the global “Occupy” movement. She wrote that the college worked with those protestors, the city, and community members at that time to have an on-campus encampment voluntarily dismantled. However, the post-CHAZ campers seem to be more tenacious.

“We have officially handed out notices to vacate or risk being charged with trespassing,” Lange wrote. “The bulk of campers are refusing to do so, and more seem to be setting up tents on site.”

“You just want to do what the police did to us,” Aaron Hall said, reported KOMO News. “You just want to push us out. This whole protest is not going to be over for a long time because Black Lives Matter.”