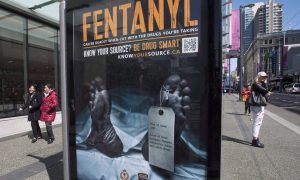 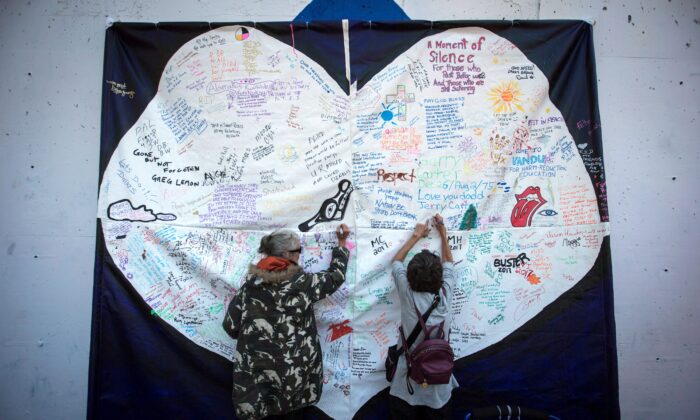 Women write messages on a banner during a memorial service to remember those who have died from drug overdoses in B.C., on International Overdose Awareness Day in Vancouver’s Downtown Eastside on Aug. 31, 2017. (The Canadian Press/Darryl Dyck)
Viewpoints

The real solution lies within families and in addiction treatment

Facing a surge in opioid overdose deaths he calls an “absolute catastrophe,” Vancouver Mayor Kennedy Stewart is hoping for help by asking Ottawa to decriminalize possession of small amounts of illicit drugs.

Some police want a safe supply of drugs free of the deadly fentanyl, which comes from China but also domestic sources.

Others say that legalized safe sources might ease matters in the short term, but that the real solution is to get addicts off drugs completely.

“We have to start taking some action toward a recovery-oriented system,” said Dr. Carson McPherson, managing director of Cedars at Cobble Hill, a B.C. drug addiction treatment facility. He told Global News that supplying drugs is “playing into what’s ultimately a sick-care system and not a health-care system.”

Between January 2016 and June 2020, there were 17,602 apparent opioid toxicity deaths in Canada, according to federal government data. Fatal overdoses and other harms from drugs have risen even more since the pandemic began last March, with 1,628 deaths occurring between April and June, compared with 1,029 deaths between January and March.

So, what to do about drug addiction? More of the same makes no sense, and legalization is not a long-term answer.

“It’s time for us to stop enabling the addicts among us,” declares a recent headline in the letters section of the Victoria Times Colonist. The letter’s author, Monica Babic, notes that “thousands of individuals and hundreds of charities are all falling over themselves to enable a most dangerous community.”

“We help people destroy themselves and our communities. I understand addiction. Was one. Family full of them. I know what enabling is. Large communities of drugged-out people are not a good thing for any city, and keeps this city from ever becoming ‘world-class.’”

By “enabling,” Babic is referring to “the free tents, the hotel rooms, and now container camps with all the food, clothing, hydro, water, medicines, drug supplies, etc. that you want. I’m a recently reformed enabler of 40-plus years, and what you are doing here is crazy.”

She warns of more to come. “Just wait for the influx of illicit drug users in this city,” she writes. “What is the example we are setting here for our youth and future generations?”

This is happening elsewhere too, of course.

Babic’s excellent letter struck a chord with readers, among them Donald Lang.

“Monica Babic’s letter brought me back to the late 1960s, when I was involved with drug education programs on the East Coast,” he writes in a letter to the Times Colonist.

“We quickly learned that presentations by medical professionals to enlighten young minds about the curse of drugs were useless. Instead, we brought in known former drug users, those who had been down that godawful road to addiction but somehow managed to be ‘free,’ at least for a time.”

When parents sought advice from the former drug users on what to do, Lang writes, “their response was very, very enlightening: The solution to drug use problems lies within the family. It’s the family that ultimately controls illicit drug issues.”

He agrees with Babic on the subject of enabling. “Coddling drug users is inviting wholesale drug-induced communities. It’s the worst-possible approach to eliminating drug use.”

We know that many of the troubled drug users are from broken families. Children who are loved and secure at home rarely go down that awful path. They sometimes do, but more often than not drug users come from broken homes, single-parent homes without dads, homes with absent or abusive mothers, or homes with an addict parent, where love and security can be missing. Good role models are often absent. To compensate, kids turn to peers who are also troubled. Drugs are part of that culture.

We need to listen to people like Lang and Babic, who have been there, and Dr. McPherson, who is working to help addicts recover.

We once had many institutions in this country that housed and helped those who suffered from mental health disorders and related ills like drug addiction. One such facility was the Brandon Mental Health Centre in Brandon, Manitoba. It was closed in 1999 as part of deinstitutionalization, when people were put out on the streets. It’s true that asylums were not an ideal solution, but what is?

Institutions not only provided help, they protected the rest of society from many of those who are doing so much harm today. Let’s stop enabling drug use. It’s making the problem worse. And let’s open more institutions equipped to cure addicts and keep them clean.

More intact and happy families would also help, as would a properly functioning economy. As soon as possible, governments need to lift their job-killing and life-damaging COVID-19 restrictions.

Brad Bird is an award-winning reporter and columnist based in B.C.