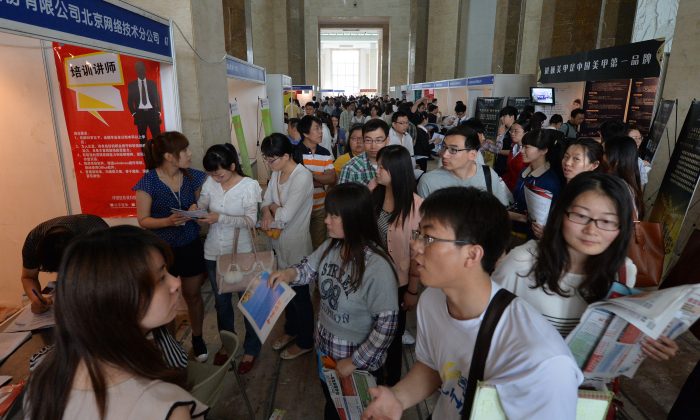 Chinese jobseekers attend a jobs fair in Beijing on May 18, 2013. Only 7.7 percent of over seven million graduates in China have signed contracts with companies during the first half of the year, a record low employment rate. (MARK RALSTON/AFP/Getty Images)
China

Increases in the number of students attending college have combined with a poor economy to produce a record low employment rate for college graduates.

At a July 25 press conference a spokesperson for the Ministry of Human Resources And Social Security said only 560,000 out of 7.27 million college graduates, or 7.7 percent, signed employment contracts with companies during the first half of the year.

According to mainland China media reports, last year was called the most difficult ever for job seekers in China, but this year is even worse.

Many college graduates choose not to find a job right after graduation due to the difficult job market. A Chinese student surnamed Bo in Economic Management told the mainland newspaper China Times that he and many of his classmates have decided to go to graduate school.

“There are too many college graduates now,” Bo said. “Even if you graduated from a key university, the job market is not promising either.”

“The record high number of graduates and years of bad job markets should raise the awareness and self-reflection of related departments and colleges,” an anonymous scholar in China’s education system said to China Times.

The scholar indicated that the increase in the enrollment number in recent years and the industrialization of education have caused a severe imbalance between the number and training of graduates and the needs of society.

Many of the college graduates also seek positions higher than their abilities, which leads to the rejection of their job applications, the scholar said.

The initial employment rate includes college graduates who continue their graduate education, study abroad, or are self employed.

A number of provincial and municipal government have recently published positive numbers for initial employment rates, with some even reaching over 80 and 90 percent.

However, experts pointed out that a lot of loopholes and fraud are used to produce good looking data, according to state-run Xinhua news agency.

“My school told us students that if we don’t have employment agreements, we must have a public defense [of their degree],” a senior in a college in Hunan Province told Xinhua. “We are afraid that a public defense will be more strict, and if we fail we can’t graduate.”

The student indicated that some of the students in his school steal company seals, and some photoshop a seal to fake employment agreements.

“The university doesn’t care if the agreement is real or not, as long as it has a seal on it,” the student said.

Self employment and studying abroad is also easy to fake as long as the students provide statements, Xinhua reported.