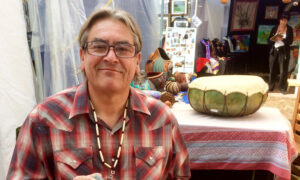 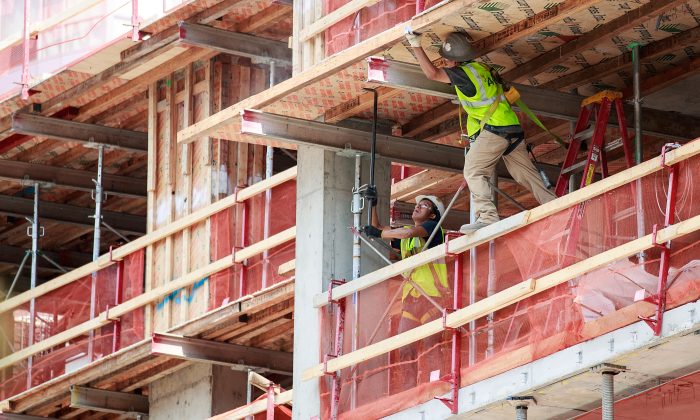 Construction laborers on a new residential building in the Brooklyn, New York City on Aug. 16, 2016. (Drew Angerer/Getty Images)
US Features

NEW YORK—Workers are arguably an employer’s most important asset. As New York State pushes to join the trend of legalizing recreational marijuana, some employers, particularly in safety-sensitive industries, foresee a host of problems if the law goes through.

The problems relate to the inherent difficulty of testing for marijuana impairment, and potential economic costs.

Recreational marijuana is already legal in nine states and the District of Columbia, while the medical use of the drug is legal in those plus another 22 states.

In New York, Governor Andrew Cuomo established a workgroup in early August to draft legislation for legalizing recreational marijuana for adult use. The state held a series of listening sessions from Sept. 5 to Oct. 17 to collect community input on how marijuana should be regulated if legalization goes ahead.

For employers, workplace safety is a high priority.

Many employers already implement policies and programs to try to create drug-free workplaces. Random drug-tests are often part of it.

Workers can be tested during pre-employment checks, post-accident, when under reasonable suspicion, and after returning to work due to a prior drug or alcohol incident.

However, unlike alcohol, there is currently no agreed upon standard (pdf) for measuring marijuana impairment. It can depend on the dose, how frequently it is used, and the user’s tolerance.

A 2017 National Highway Traffic Safety Administration report found it’s difficult to develop a standard to measure marijuana impairment because “there is no chemical test for marijuana impairment” that quantifies the amount of marijuana in the body. The report also found that the presence of THC is not always a reliable measure of impairment.

Testing for marijuana is also more challenging than testing for blood-alcohol concentration because the body reacts to marijuana differently than to alcohol.

Dr. Matthew Lee, a pharmacologist and doctor, wrote on Expert Pages that there is only one chemical in alcohol that is not stored by the body, while marijuana is made of multiple ingredients including the psychoactive ingredient delta-9-tetrahydrocannabinol (THC).

“Marijuana is immediately taken up by the fat cells in the body, where it is released slowly over time. …[It] is the reason why marijuana can be detected in the blood so long after it is consumed,” he said.

Legal editor of XpertHR and a former employment attorney, Beth Zoller, advises New York employers to approach marijuana rules the same way as alcohol. Even if marijuana is legal, there are strict parameters in the laws that allow for employers to maintain drug free workplaces, that allow employers to impose conduct rules to protect overall “safety, efficiency and productivity.”

“It’s really the same thing as alcohol. You ban alcohol from the workplace—with these rules in place you’re allowed to do it on your own time outside the workplace,” she said.

Louis Coletti, president of the Building Trades Employers’ Association, said it’s possible for workers to fail a drug test for marijuana used outside of work, which can then lead to economic consequences for the employer. The association represents 26 construction industry associations and over 1,300 contractors in New York.

“So what happens to someone who’s using, say, marijuana purely as a recreational drug and they test positive that Monday, Tuesday or Wednesday,” Coletti said. “They are brought down from the site and sent home and told to stay home for two or three days without pay.”

Coletti said the shortage of workers in the New York construction labor market adds pressure in finding a suitable individual to replace that worker.

He adds that this can then delay projects and put pressure on budgets, along with being a safety hazard to both the worker and the public.

“The potential legalization of marijuana sort of puts that drug upfront and complicates the problem,” he said. “Or could perhaps expedite the conversations because it’s a real possibility of happening,” he added.

Zoller raised similar concerns, adding that drug users could subject employers to not only more workers’ compensation claims but also to claims by third parties who have been affected by an accident.

“[Workers] can’t be as efficient if they can’t work with a clear head and clear mind,” Zoller said.

She also said employers are concerned that impaired workers can reduce the profits of their business and make it less profitable in the long-run.

Until marijuana impairment standards and more reliable testing systems have been developed, it seems employers have a whole new set of challenges to battle through.