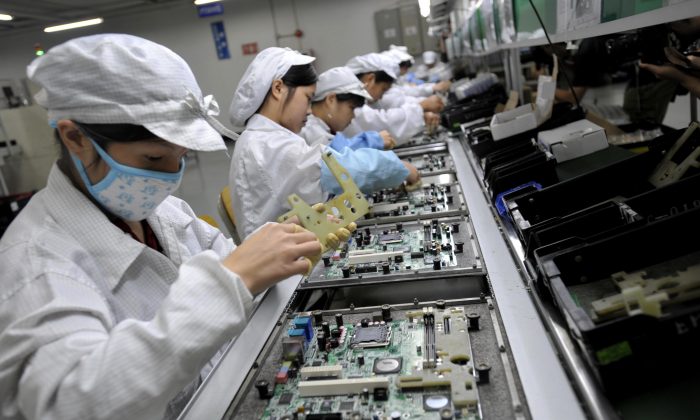 Among the goals laid out in Beijing’s national agenda—such as its “Made in China 2025” policy—is to prop up the country’s tech manufacturing sector and advance China’s reputation as a high-tech powerhouse.

And yet, this very tech sector, which supplies the world with electronic gadgets, currently faces a serious problem of employee suicides. Much of the blame rests on the Chinese regime, according to a recent study.

The study looked at 167 cases of attempted or completed suicide based on internet sources since 2010. In addition, the study conducted surveys with 5,592 employees from 44 Chinese electronics companies, and interviewed 252 employees from four Chinese companies.

The study found multiple contributing factors that included employers ignoring signs of employee stress, using punishment to enforce productivity requirements, and refusing to give employees bonuses that they were promised when they were first recruited. Additionally, the study found that employers often resorted to coercion to keep employees in grueling working cycles of repetitive movement for 80 hours or more per week, including forcing overtime, withholding income to keep employees from resigning, denying requests for time off, and fining employees for incomplete work.

These employers are responsible for suicides at their companies, the report said.

“Employee suicide in the Chinese electronics sector reflects the repression of workers’ collective voice,” said Dimitri Kessler, director of ERI and one of the authors of the study, in a statement issued on the Electronics Watch website.

The study pointed out a peak in the number of suicides in 2010, most prominently with one Chinese company, only identified as “Supplier F,” that witnessed a “string of suicides.”

But the report’s authors don’t believe the decline in reported suicides is “entirely due to fewer incidents of employee suicide. It is possible the government grew concerned … this triggered tighter control of public reporting of suicides.”

Though the study didn’t identify “Supplier F,” numerous references make it all but certain that it is, in fact, Apple supplier Foxconn. In 2010, at least 14 Foxconn employees died in apparent suicides that were attributed to difficult working conditions.

“Censorship undermines deeper solutions when it permits employers to circumvent accountability for negligence that directly contributes to suicides. And it prevents more effective monitoring and analysis of the frequency and evolution of suicides which could contribute to prevention efforts,” the study stated.

It wasn’t only suicide incidents that were censored. The study found that online stories of suicide survivors, such as criticism of employers, or police ruthlessness and suspicions of company wrongdoing, were sometimes removed by internet censors. Such censorship hinders the possibility of independent monitoring that can “pressure employers to respect sensible norms and requirements in their response to suicides,” according to the study.

Suicide survivors and family of suicide victims are also at a disadvantage when fighting for their rights, given that employers in China have been known to collude with local police, according to the study.

In one incident in November 2014, according to the report, an unidentified employee was thrown into prison by local police, charged with disrupting order at his workplace, after he threatened to jump from a second-story window because of withheld income.

In April 2013, an employee at a factory owned by the Hong Kong-based semiconductor company ASM, located in the southern Chinese manufacturing hub of Shenzhen, died two days after he and his workers organized a strike against the company’s decision to move from Shenzhen.

Local police reported his death as a suicide, despite family members of the man expressing concerns that “the employer and police were using the veil of suicide to hide a homicide in connection with the strike,” according to the study.