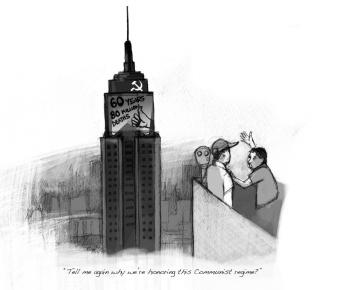 Evan Mantyk
biggersmaller
Print
The Empire State Building, a New York City and American icon, will turn red and yellow on Wednesday and Thursday in celebration of the 60th anniversary of the People’s Republic of China.

The act seems simple enough. The Olympics were in China, China makes all of our toys and Wal-Mart merchandise, and they’ve even been buying all our debt up. Why not?

Here’s why not: Imagine the Empire State Building turning the colors of the Third Reich, the Ku Klux Klan, al-Qaeda, or maybe just shooting out all of its liquid waste in high pressurized bursts out onto the crowds of tourists on 34th Street.

Well, this might as well happen, since the Chinese Communist Party that has raped China for the last 60 years is no better than any of those groups, and is arguably worse.

The communist regime put the “People’s Republic” in the People’s Republic of China as part of an outdated Marxist-Leninist propaganda. Today, the very same propaganda mouthpieces that helped create the communist regime in China in 1949 are at work helping in the oppression and killing of innocent people who disagree with the regime over its policies on religion, politics, ethnicity, the rule of law (which it claims to have), media, human rights, and so on.

Worse still, the world’s media and communication capabilities are a hundred times better now than they were when the Nazis and the Ku Klux Klan were in their heyday. Now, its been internationally recognized by the U.S. government, the United Nations, the European Union, Amnesty International, Freedom House, and countless other organizations and media outlets that the communist regime is rotten to its warped and disgusting core.

How could the Empire State Building make such a stupid choice to honor the largest and most naked example of inhumanity known in the history of man? A couple of possible motives (though I don’t claim to have any evidence) could be the promise of an even larger number of Chinese tourists, or maybe just cash up front from the Chinese Consulate.

Just consider that Chinese Consul General Peng Keyu will take part in the lighting ceremony on Wednesday. This is the same guy who was recorded (on a verified recording) encouraging mainland Chinese people in Flushing, Queens to intimidate and malign practitioners of the peaceful Falun Gong spiritual practice there. (http://en.epochtimes.com/news/8-5-24/70954.html)

The terrorist attacks on Sept. 11 that destroyed the two World Trade Center towers in lower Manhattan were heinous acts. The attacks on that day fortified America’s resolve—we seemed to agree that despite criticism of its economics and culture, ours is a moral nation with underlying integrity and an unconquerable spirit.

Yet, why are we letting a nation whose government has no morality or integrity conquer one of our most prized buildings?