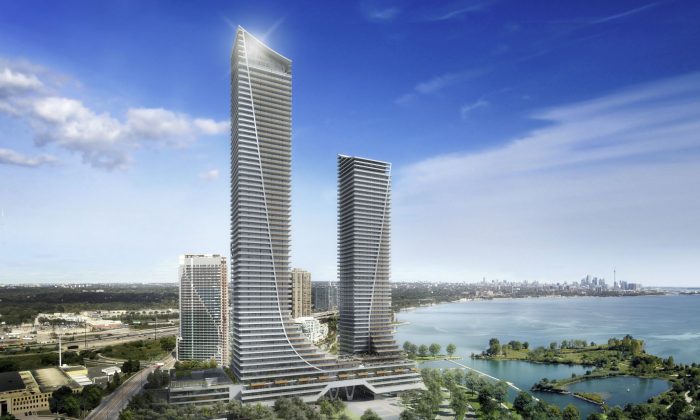 Empire Communities has found that new home buyers who were traditionally drawn to Toronto are willing to venture beyond the Greater Toronto Area.

As well as high-rise condo projects in Toronto and Oakville, Empire has created large low-rise communities in Golden Horseshoe centres such as Hamilton, Stoney Creek, Brampton, Brantford, and Niagara Falls. What it’s discovered is that buyers, including Chinese purchasers, are looking beyond Toronto, whether they seek an investment property or a home they will live in themselves.

“We saw in 2015 that a large number of our purchasers who had been predominantly focused in the GTA move to Empire’s Southwestern Ontario projects, and it was quite a surprise” Dan Flomen, Empire’s senior vice president of sales, told the Epoch Times. “We’ve drawn a lot of people from Markham, Brampton, Richmond Hill, and downtown Toronto who are looking for investment properties as far southwest as Niagara Falls.”

Then there are those end user buyers—who can’t afford a home in Toronto and who don’t want a condo—looking to buy detached homes in places such as Hamilton and Stoney Creek.

Empire communities attract multiple ethnicities, including buyers from mainland China and Hong Kong. Flomen says these buyers are embracing sites outside of Toronto, where they can buy two homes for what a single home would cost in the big city. That’s especially attractive where there are two generations who enjoy being able to live side-by-side yet have their own house. At Empire’s Imagine project in Niagara Falls, 10 to 15 percent of buyers have been Chinese.

Empire is maintaining its presence as a condo builder in Toronto with Eau du Soleil, one of the tallest buildings on the waterfront in Canada, at 66 storeys. That tower, in southwest Toronto along Lake Ontario, will be joined to a second 49-storey tower by a podium. More than 85 percent of the Eau du Soleil suites have been sold, but Empire is currently offering premium Water Tower and terrace suites on the top floors, geared to end users and featuring spectacular views. Quite a few Chinese homebuyers have purchased there, as well Asian investors who have been interested in the non-water facing units.

“It will be a huge asset to the Humber Bay community,” says Flomen. “Eau du Soleil will be the bookend to Palace Pier built 30 years ago at the other end of the community.”

Two of Empire’s Oakville projects, Rain and Senses, have been successful as well, drawing buyers who may have lived in places such as Markham or Richmond Hill. They typically work in Toronto or Mississauga and are moving to Oakville to take advantage of the lifestyle offered there, which provides a community feel in a big city without the hustle and bustle of Toronto.

In Toronto’s east end, Empire has a stacked townhouse project, Ten88, on Progress Avenue, where 30 of 105 units are still available. Units are priced at less than $450 a square foot, including parking. The project is close to Highway 401 and has been popular with Chinese buyers.

In 2016, Empire will launch new releases at several of its Golden Horseshoe low-rise sites and continue construction of its Eau du Soleil condo. In March, it will launch Empire Midtown at Oakwood and Eglinton Avenue, with 220 units and 16 storeys, next door to an LRT station, priced at $525 per square foot. As an incentive to investor buyers, Empire is offering a three-year rental guarantee at $3 per square foot and offering eight percent interest on deposits for one year.

Chinese buyers are an important component of Empire’s business and it has established close relationships with Chinese brokers and holds exclusive events for them. If buying homes for themselves, Chinese buyers want luxury homes in specific locations, says Flomen.

He predicts that the strong real estate market of 2015 will continue in 2016, with similar sales numbers. Although the rules for government-backed mortgage insurance changes on Feb. 15, requiring larger down payments on homes priced at $500,000 and above, Flomen says that’s a plus.

“Homeowners should be capable of owning without pushing themselves financially,” he says. “There is huge demand for home ownership in the GTA and Golden Horseshoe and we continue to have low interest rates. I don’t believe for a second that things will slow down.”

Empire Communities is one of Canada’s largest homebuilders and has built more than 10,000 new homes and condos across Southwestern Ontario and the GTA, with 20,000 more planned. Empire was named 2015 Home Builder of the Year by the Ontario Home Builders’ Association.