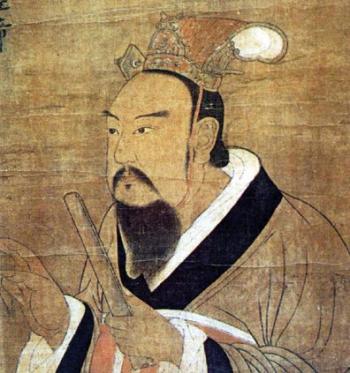 Epoch Times Staff
View profile
Follow
biggersmaller
Print
Emperor Wu of Liang (464-549), also called Xiao Yan, was born at Nanlanling Zhoudouli during the Southern dynasties (420-589). Xiao Yan reigned for 48 years and died at the age of 86. He was one of the longest living emperors in Chinese history, second only to Qing Dynasty emperor, Qianlong (1711-1799).

According to the Comprehensive Mirror for Aid in Government (Zizhi Tongjian), a classic of Chinese historiography, Emperor Wu “had a broad knowledge and was versed in literature, Yin-Yang Theory, riding, archery, music, both cursory style and clerical style calligraphy, and Chinese Wei-chi.” He was especially talented in literature and the arts. People in his time referred to him and seven other renowned literary scholars as “The Eight Friends of Jingling.”

Emperor Wu of Liang believed in Taoism when he was young. When he ascended to the throne in the third year, he called two hundred thousand monks and laymen to hold a large scale religious assembly and said he would “Forgo Taoism and return to Buddhism.” He hoped to build a “Buddhist country,” wherein people would be directed from the practical focus on fame and fortune toward the pursuit of liberation from the world of red dust.

After Emperor Wu converted to Buddhism, he became a monk, fully four times, in the Tongtai Temple. In 527 when he lived in the temple, he used rough crocks, cups and bowls, read and recited Buddhist scriptures daily on hearing the morning bell, until sunset when the drum was beaten, and cleaned the temple with other monks.

But an empire cannot exist without its king, so after much begging from the civil and military ministers, Emperor Wu was finally persuaded to return to the palace.

But in September 529 he again refused to go back to his palace and again became a monk in the Tongtai Temple.

His ministers tried every means to persuade Emperor Wu, but their efforts were in vain. Finally, officials contrived to donate an enormous sum to the temple for his redemption; in return Emperor Wu agreed to return to the palace in October 529.

But the tug of the monastic robe was irresistible. In 546, the 83-year-old Emperor Wu left the palace once again to become a monk. This time, the ministers spent double what they paid before to “ransom” him.

Then, again, just one year later, Emperor Wu entered Tongtai to become a monk. It was the fourth time. He stayed there for 37 days before the ministers again got him back.

Respected and promoted by successive emperors, the spread of Buddhism reached its peak during the Southern dynasties. From the royal clan to the aristocracy, to ordinary people, society as a whole was greatly influenced by the teachings of the Buddha.