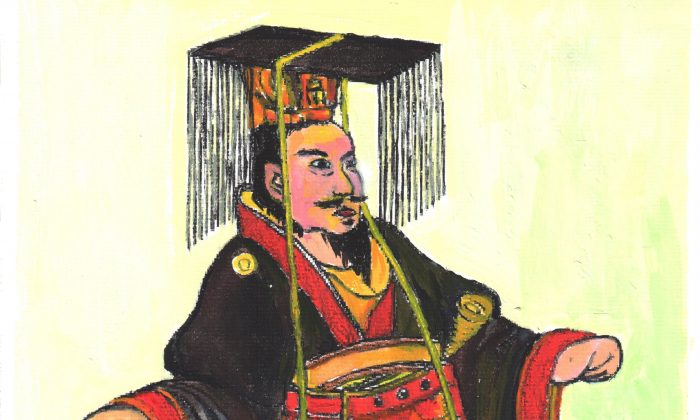 Emperor Wu is regarded as the most outstanding of all Han emperors due to his role in vastly expanding China’s territory and creating a flourishing, centralized state. (Kiyoka Chu/Epoch Times)
China

Of all Han Dynasty notables, he earned the highest regard from traditional Chinese historians due to his role in vastly expanding China’s territory and creating a prosperous, centralized state that is remembered today as one of the greatest periods in Chinese history.Born in 157 B.C., the future Emperor Wu was the grandson of Emperor Wen and the 10th child of Emperor Jing. When his father died in 141 B.C., the 16-year-old crown prince assumed the throne as the Han Dynasty’s seventh emperor.

Emperor Wu introduced the custom of naming the emperor’s coronation year with a blessed title, or nian hao, as reference for Chinese historical records, and then changing the title every year or every few years, either during auspicious times or to commemorate an event. The first year of Emperor Wu’s reign was named Jian Yuan, meaning “establishing the first.”

After ascending the throne, Emperor Wu implemented a series of measures to consolidate the strength of the central government. From the beginning of the Han dynasty, many kinsmen of the previous emperors were delegated large areas to govern. Soon, their power posed a potential threat to the emperor.

Emperor Wu diluted their power by passing a law that allowed regional kings and dukes to pass their land on to any of their children rather than only their first sons. This led to the large areas being divided into many smaller units.

Then, the central government gradually assimilated these smaller units into a province controlled by the emperor, replacing the old concept of individual states or kingdoms loyal to the emperor but each with its own king. Emperor Wu also took fiscal reform measures to increase state revenue. He raised taxes and imposed new taxes, to include business, and implemented harsh measures against unethical merchants. The iron, salt, and alcohol industries became nationalized monopolies.

Facing a much expanded empire, Emperor Wu appointed 13 regional inspectors to supervise the work of the provincial governors to improve the empire’s administration system.

These officials’ responsibilities were to report to the chief inspector on the performance of the local governors and nobles, including any abuse of power or corruption, and on the people’s feedback about their governance.

The chief inspector would then report directly to the emperor. It was regarded as the first independent and systematic oversight in Chinese history.

In order to select the social elite into the civil service, Emperor Wu established a recruitment system that allowed officials at all levels to recommend outstanding individuals for apprenticeships or scholarships to serve government.

Such an approach provided opportunities for capable scholars with less privileged statuses to enter the administrative system. Even people from very poor or lower backgrounds, like slaves and prisoners of war, were able to become important officials and generals.
In addition, Emperor Wu made Confucianism the state orthodoxy and made training in Confucian studies a requirement for civil service candidates. This ended the dominance of a blended Legalist and Daoist philosophy during the early Han years.

Emperor Wu established an “Imperial College” in the capital, Chang’an (長安), which was the first national college in Chinese history. The majority of lectures in this college were based on Confucianism and graduates that passed the government examinations went directly into civil service.

When the Imperial College proved to be a success, more Confucian colleges and schools were established around the empire. This combination of recommendations and examinations in the civil service recruitment structure became an important part of the Emperor Wu’s legacy.

Making Confucian philosophy the state orthodoxy had a profound impact on the politics, society, and culture of China and East Asia.

Confucian ideals center on advancing ethical conduct and moral principles such as benevolence, righteousness, propriety, wisdom, and faithfulness, built on the models of the ancient sage kings. Military Campaigns and the Silk Road
Recognized as a great military campaigner, Emperor Wu led Han China through its greatest expansion in all directions. He abandoned the previous emperors’ defensive policies, regained control over Korea in the northeast, and had troops march into southern China and what is now Vietnam.

Most importantly, the emperor was determined to win the war against the powerful Xiongnu (or Hsiung Nu), an alliance of nomadic tribes that lived in the region of modern-day Mongolia and that posed a major threat on China’s northern frontier.

A series of vigorous attacks were launched that led to the defeat of most Xiongnu kingdoms. Han troops drove the Xiongnu from the north away from China’s borders and then expanded further west into what is now Kyrgyzstan and Uzbekistan. Meanwhile, beginning in 138 B.C., the emperor dispatched his envoy Zhang Qian (張騫) to the far western regions to seek long-lasting allies and to foster culture exchanges. This resulted in further connections between the Han territories, the western region of China, and central Asia.

This expedition later enabled Chinese silks and other goods to be transported from Chang’an to as far as today’s Iran, and then further west to Europe, creating the route known as the “Silk Road.”

China made its name in the world during the Han Dynasty and that is why the Chinese people are commonly referred to as Han Chinese.

‘Edicts of Repentance’    Emperor Wu was in power for 54 years and died at the age of 70. Under his reign, Han China saw its greatest expansion, surpassing the size of the Roman Empire during the same period.

However, the enormous costs associated with his military campaigns, territorial expansions, and luxurious palaces, eventually exhausted the state treasury, the country, and its people.

Near the end of his reign, Emperor Wu regretted his past policy mistakes and publicly criticized himself and apologized to his subjects by issuing an “edict of repentance.”

He rejected a proposal for military expansion in the west and instead supported a recommendation to promote agriculture. And warfare and territorial expansion generally ended.

Although he sought to atone for his misdeeds, his military achievements still won him the posthumous title of “Wu (武),” which means “martial.”