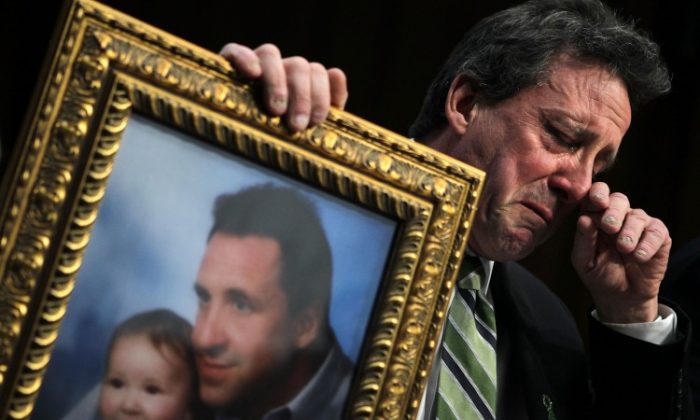 Neil Heslin, father of 6-year-old Sandy Hook Elementary School shooting victim Jesse Lewis, holds a picture of himself with 6-month-old Jesse as he testifies during a hearing before the Senate Judiciary Committee on Feb. 27, 2013, on Capitol Hill in Washington, D.C. (Alex Wong/Getty Images)
US

Neil Heslin, father of 6-year-old Jesse Lewis—one of 20 children killed at the Sandy Hook school shooting in Newtown, Conn., on Dec. 14—sobbed as he talked about his son.

“Jessie was the love of my life,” Heslin said, struggling to speak. “It is hard for me to be here today.”

Heslin held up a large framed photo of himself with 6-month-old Jessie smiling in his arms and pointed to two other more recent photos, which were standing on an easel in the Senate room.

“I am not here for the sympathy and the pat on the back … I am here to speak up for my son,” he said.

Heslin was testifying at a Senate Judiciary Committee hearing to discuss a bill banning assault weapons, a bill that was introduced in January this year by Sen. Dianne Feinstein (D-Calif.).

The Assault Weapons Ban of 2013 (S. 150) calls for a ban on the most commonly owned military-style assault weapons, large-capacity magazines, and other types of ammunition feeding devices. It is part of a package of gun control laws proposed by President Barack Obama in the wake of the Newtown shootings.

“I feel these so-called assault weapons that have certain characteristics should fall in that category and be banned,” he said.

Included at the hearing were members of the Newtown community, other victims of gun crimes, and law enforcement officers from around the country.

Emotions were never far from the surface at the Senate hearing, with many, including Feinstein, wiping away tears as Heslin spoke.

Tempers also flared and spontaneous applause broke out during an exchange between witness Edward Flynn, chief of police at the Milwaukee Police Department, and Sen. Lindsey Graham (R-S.C.).

Graham noted that around 80,000 people have failed background checks when they tried to purchase guns, but only 44 of those people have been prosecuted.

“It doesn’t seem that important to law enforcement officers,” Graham said, arguing that instead of developing new laws, law enforcers should focus on implementing the laws already in place.

“How many cases have you made for people failing background checks?” he fired at the Milwaukee police chief. “How many prosecutions have you achieved?”

“We are not in a paper chase, Senator—we are trying to prevent the wrong people buying guns. That is why we do background checks,” Flynn said in a raised voice and with obvious frustration.

Republicans questioned the effectiveness of the assault weapons ban that was introduced in 1994 and expired in a sunset clause in 2004. They cited research done following the ban that found an insignificant reduction in gun crime.

“Madame Chairman, when something has been tried and not found to work, we should try different approaches rather than re-enacting that which failed,” said Sen. Chuck Grassley (R-Iowa), ranking member of the Senate Judiciary Committee.

Witness John Walsh, U.S. attorney for the District of Colorado, countered that research following the ban has been scant—and inconclusive.

He said that more revealing is the rise in gun-related crime since the ban has expired—there has been a 38 percent increase in the use of weapons with high-capacity magazines, according to Walsh.

“The lesson for us today is that any ban or restriction in military-style assault weapons and high-capacity magazines must be permanent to ensure maximum effectiveness,” he told the hearing.

Flynn said that in his first 25 years of policing, a six-shot revolver was all he needed. Now, it is an “arms race,” he said, as police need assault weapons in order to deal with criminals that use “high-capacity, rapid-fire, easy-to-use weapons.”

Flynn said that he was in Arlington, Va., when the 9/11 terrorist attacks on the World Trade Center took place, and he has since realized what it takes to bring about change in America.

“That weapon of mass murder is no longer used in this country because we have taken the steps to keep it out of the hands of those who would kill us,” he said of airline security.

“How many people have to get murdered in a mass murder for it to be enough?” he asked. “Is 20 babies enough to say these instruments should not be so easily distributed?”