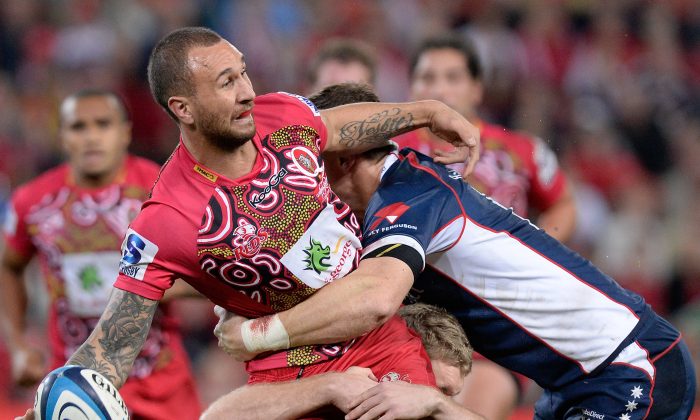 Under pressure, Quade Cooper passes, while playing for the Reds against the Rebels on Saturday June 1. (Bradley Kanaris/Getty Images)
International

The British and Irish Lions are in Australia to beat a Wallaby side that has been hit by injury, selection controversy and a divided fan base.

On top of that, some Australian fans are upset that the Super 15 will be put on hold to accommodate the Lions tour.

But all that Australian discontent will turn into passion on Saturday night (June 8) when the Reds face the Lions in Brisbane, one of rugby’s heartlands. The fiercely proud Queensland fans will cheer every Reds move—not just because they would, but for personal reasons as well.

For example, Reds coach Ewen McKenzie is the Wallaby coach in waiting. Queenslanders believe he should be the coach now.

McKenzie and Deans have argued publicly over the non-selection of Cooper. So the Reds, who are a passionate side, will play all-out to defeat the Lions.

Wallaby coach Deans said Cooper could use the match to force his way into the Wallabies, by playing a conservative, defence-oriented game.

I believe Cooper will play how he wants—to show the world that he is smarter than coach Deans. I’m also sure that Reds coach McKenzie—a rugby tactician—will have a plan to undo the Lions, and that plan will focus on Cooper.

Queensland often plays second-fiddle to neighbouring New South Wales, so Queenslanders have made an art of turning adversity and criticism into the fuel that fires their passion.

The game will be won up front, where the Lions will have an advantage. On paper. But the Queensland forwards will have turned the Cooper/McKenzie issue into a call to arms, so things will get hot.

The Lions will target Cooper, of whom two things are known. Under pressure, he can lose composure. In rugby that is almost equivalent to a boxer jumping out of the ring. It’s laughable.

The second thing is, Cooper can win any game single-handedly.

Unfortunately, for Australian fans, all this passion around Cooper/McKenzie is divisive. The passion is about Queensland having a go at the rugby establishment (NSW).

But that’s typically Australian. Everything is usually forgotten by the time the Tests start.

This time, too. But the impediments are huge. Fans are deeply divided over the Cooper issue, and not just in Queensland.

As well, fans are deeply divided over Wallaby coach Deans.

And finally, the Wallabies are a weak side…when compared to the side that played the Lions last, in 2001. That brilliant side won a close series 2-1.

It was filled with legendary players like George Gregan, Stephen Larkham and John Eales, to name three, though there are many more.

The current Wallaby side is short on stars. Only Reds halfback Will Genia would be close to the greats in the last side.

The Lions played the Western Force in Perth last night with the result too late for print. However, the Lions line-up that played last night was a different one to that which plays on Saturday against the Reds.

Lions Squad for the Tour to Australia