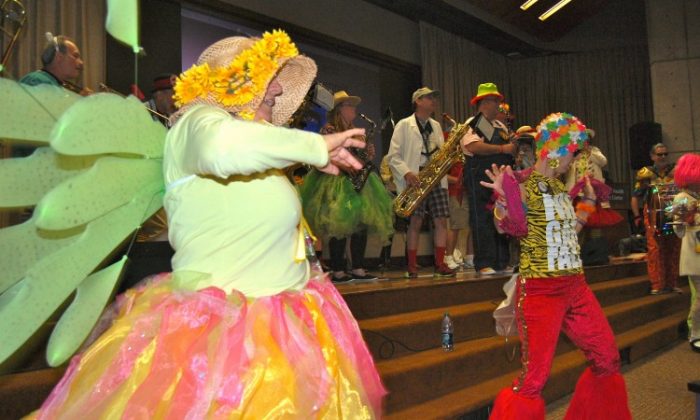 ATLANTA—Humanitarians gathered at Emory University in Atlanta April 13–15 with the goal of igniting an international peace-building movement.

Over 200 speakers, exhibitors, and participants came from around the globe for an opportunity to learn, share, and help create innovative ways to improve global health and sustainability. Topics reached beyond the United States from Ghana to Tibet, Kuwait, Honduras, and more. Speakers ranged from Gandhi’s granddaughter to the keynote speaker, Barbara Marx Hubbard.

Hubbard, a futurist, author, and educator, is the subject of a biography by Neale Donald Walsch called “The Mother of Invention.”

Hubbard said a student of hers had invited her to the summit, which was a “global town meeting in the round with the common goal of matching needs with resources, with the theme ‘global health caring.'” She said a valuable part of the meeting was that “it’s not voting, win or lose, it’s co-creating, and I feel that’s very important.”

Dr. Neil “Doc Hollywood” Shulman, associate professor of medicine at Emory, wrote and co-produced the 1991 film about his work called “Doc Hollywood.” Shulman led the global summit, introducing nearly all of the speakers, many of them distinguished doctors and humanitarians.

He spoke before the summit of one of them: Dr. Dollar. “I’ve been with Emory a long time, I’ve been here 45 years, and one day after meeting Dr. Dollar, I found out people like this are not necessarily one for attention, and there are others like him in the world,” he said.

Dollar is a heart surgeon at Grady Hospital in Atlanta, and has adopted children he met through his international mission work. One child from Ethiopia needed heart surgery, which Dollar provided, and he later helped the child through college. Another child was from Mexico and had several disabilities.

“I thought, if we can get people together who do these things, what then is possible? If the people who had that kind of spirit can do these things, and if they were willing to donate their time, what could become of it?” asked Shulman.

According to Shulman, Dollar never declines to treat a patient who cannot pay. “If anyone here needs free heart surgery today, he’s your guy,” he said.

Shulman said Emory donated the space for the conference and, if other educational institutions would come on board and duplicate the humanitarian summit, it could play a huge part in getting these kinds of dialogue started in colleges.

“This will get students more in a role of leadership this way, it’s not going to cost our university if we keep our doors open for a weekend, schedule meetings, and let everyone pay their own way.”

He said by talking to each other, “people would get more excited … and people would find better ways to make a difference, whether it’s right here in Atlanta or anywhere in the world.”

According to the program, the bottom-line of the free, volunteer-staffed event was “Everybody’s dash of life should be peaceful, with adequate food, shelter, and clean water.”

Shulman described the event’s spirit by saying, “We are here with people who want to make a difference, not a dollar … humanizers, not monetizers.”