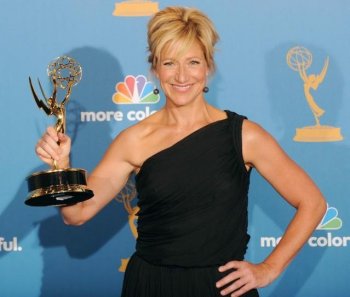 Falco has also won several other Emmy Awards for Outstanding Lead Actress in a Drama Series for her role as Carmela Soprano on the HBO series “The Sopranos” in 1999, 2001, and 2003.

Jane Lynch won Best Supporting Actress in a Comedy Series for her role in Fox’s “Glee.”

Glee director Ryan Murphy, was given the Emmy Award for Directing a Comedy Series.

“I would like to dedicate this to all of my teachers, who taught me to sing and fingerpaint,” said Murphy at the ceremony.

Bryan Cranston and Aaron Paul of “Breaking Bad” received the Emmy Award for Lead Actor and Emmy Award for Supporting Actor in a Drama Series, respectively.

Temple Grandin, a movie based on an accomplished autistic woman of the same name, topped several Emmys in the miniseries and movie category.

Receiving a total of 14 nominations, its director Mick Jackson, actor David Strathairn, and actress Julia Ormond won Emmy Awards for Directing, Supporting Actor, and Supporting Actress in a Miniseries or a Movie respectively.

George Clooney, recognized for his efforts to raise funding and awareness for victims of several major conflicts and natural disasters in the past such as Darfur and Hurricane Katrina, was presented the Bob Hope Humanitarian Award.

Clooney found the right tone by keeping it light, and still striking a chord. He said, "I have offered to go to south Sudan and have a wardrobe malfunction," commenting that much of the headline news is diverted from the real issues of the day. "But it was pointed out to me that I'm 49, and the consensus was that it would just be upsetting. And kind of sad."