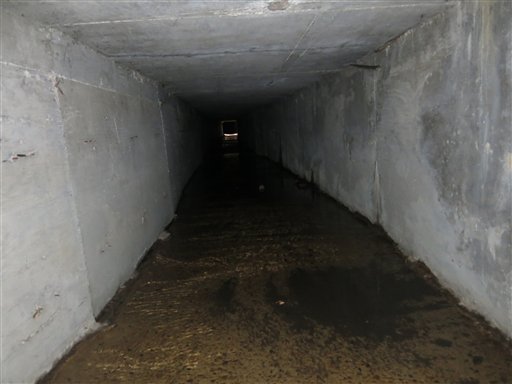 An interconnected tunnel in the city's drainage system that infamous drug boss Joaquin Guzman Loera, "El Chapo" used to evade authorities, is shown, in Culiacan, Mexico, Sunday Feb. 23, 2014. A day after troops narrowly missed infamous Guzman in Culiacan, one of his top aides was arrested. Officials said he told investigators that he picked up Guzman from a drainage pipe and helped him flee to Mazatlan but a wiretap being monitored by ICE agents in southern Arizona provided the final clue that led to the arrest of one of the world's most wanted men. (AP Photo/Adriana Gomez)
Americas

Emma Coronel Aispuro: El Chapo’s Wife With Him When He Was Arrested (+Photos)

Emma Coronel, the wife of infamous drug kingpin Joaquin ‘El Chapo’ Guzman, was with him when he was arrested.

They were hiding out in Mazatlan, a beach resort town on Mexico’s Pacific Coast.

Police barged into the home over the weekend and arrested Guzman while Coronel, a 24-year-old beauty queen who gave birth to twin girls with Guzman two years ago, stood by.

Guzman tried to escape through a network of tunnels hidden beneath his bathtub but authorities quickly caught up with him.

Breakfast was still on the stove when he was captured.

Guzman is known as possibly the wealthiest drug trafficker in the entire world.

One of the properties that was interconnected by tunnels in the city’s drainage system that infamous drug boss Joaquin Guzman Loera, “El Chapo” used to evade authorities is shown, in Culiacan, Mexico. (AP Photo/Adriana Gomez)

Wiretaps and aides led to his capture, officials said.

For 13 years Guzman watched from western Mexico’s rugged mountains as authorities captured or killed the leaders of every group challenging his Sinaloa cartel’s spot at the top of global drug trafficking.

Unscathed and his legend growing, the stocky son of a peasant farmer grabbed a slot on the Forbes’ billionaires’ list and a folkloric status as the capo who grew too powerful to catch. Then, late last year, authorities started closing in on the inner circle of the world’s most-wanted drug lord. Bit by bit, they got closer to the crime boss.

Then on Feb. 16, investigators from Mexico along with the Drug Enforcement Administration, the U.S. Marshals Service and Immigration and Customs Enforcement caught the break they badly needed when they tracked a cellphone to one of the Culiacan stash houses Guzman used to elude capture.

The phone was connected to his communications chief, Carlos Manuel Ramirez, whose nickname is Condor. By the next day Mexican authorities arrested one of Guzman’s top couriers, who promptly provided details of the stash houses Guzman and his associates had been using, the officials said.

At each house, the Mexican military found the same thing: steel reinforced doors and an escape hatch below the bathtubs. Each hatch led to a series of interconnected tunnels in the city’s drainage system.

An open steel reinforced door leads to a series of interconnected tunnels in the city’s drainage system in the city of Culiacan, Mexico. (AP Photo/Adriana Gomez)

The officials said three tons of drugs, suspected to be cocaine and methamphetamine, were found at one of the stash houses.

A reporter who walked through one of the tunnels had to dismount into a canal and stoop to enter the drain pipe, which was filled with water and mud and smelled of sewage. About 700 meters (yards) in, a trap door was open, revealing a newly constructed tunnel. Large and lined with wood panels like a cabin, the passage had lighting and air conditioning. At the end of the tunnel was a blue ladder attached to the wall that led to one of the houses Mexican authorities say Guzman used as a hideout.

A day after troops narrowly missed Guzman in Culiacan, top aide Manuel Lopez Ozorio was arrested. The officials said he told investigators that he picked up Guzman, Ramirez, and a woman from a drainage pipe and helped them flee to Mazatlan.

A wiretap being monitored by ICE agents in southern Arizona provided the final clue, helping track Guzman to the beachfront condo, the officials said.