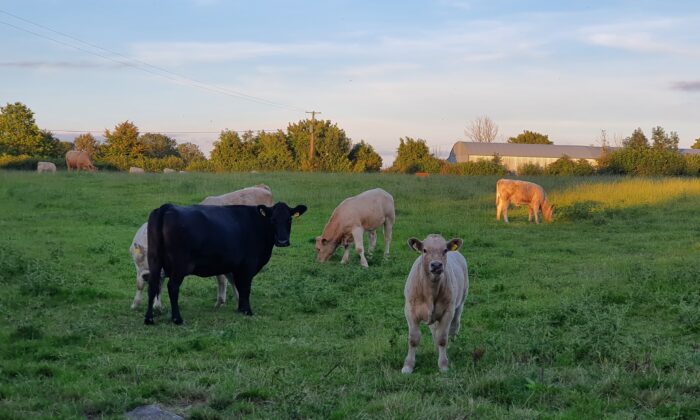 The Irish government doesn’t have “one iota of a plan in place at the moment” to help farmers achieve the goal it imposed to reduce 25 percent of greenhouse gas emissions, a rural lawmaker said on Thursday.

Despite ministers’ promise that no animal will be culled, TD for Galway East Seán Canney said he doesn’t believe the goal will be achieved without the culling of cows, which would, in turn, increase overall global emissions due to carbon leakage, and exacerbate the risks to food security.

Tim Cullinan, the president of the Irish Farmers Association (IFA), told The Epoch Times that it will be “extremely difficult and challenging” for farmers to meet the goal.

The Irish government last month set the amount of greenhouse gas emissions each sector has to reduce by 2030 as part of its “Climate Action Plan,” which was published after parliament passed a law committing Ireland to slash emissions by 51 percent by 2030 and reach net zero by 2050 at the latest.

Some ministers reportedly pushed for a 30 percent target for agriculture, the upper limit set out in the action plan, but farmers and rural lawmakers have resisted going over 22 percent.

Following negotiations among coalition government ministers and stakeholders, the sector was given a target of a 25 percent reduction, and all measures taken will be voluntary.

Farmers are promised “generous financial incentives” and “an additional financial package in Budget 2023″ that are yet to be specified.

According to the Irish Independent, award-winning farmer Trevor Crowley said last week that “it seems the only option for the farmer to cut his emissions is to cull his herd.” The Farmers Journal also reported on a proposal from the Food Vision Dairy Group to offer farmers €5,000 for each animal culled, but Environment Minister Eamon Ryan has insisted that “any change in animal numbers will happen naturally, and will not be forced.”

‘No Plan to Achieve It’

Speaking to The Epoch Times on Thursday, Canney said no plan or strategy on how to achieve the target had been discussed during the negotiations.

“Certainly if farmers are to have their emission reduced by 25 percent, that is fine,” the lawmaker said. “But we’ve no plan to achieve it.”

“Where is the money coming from? What is the budget to help the farmers get this achieved? … Absolutely we are still standing still. We are not moving,” he said.

Canney said he believes that “there is no plan on how we’re going to reduce the emissions on the farms other than culling the number of cows that we have.”

Having previously described the arbitrary target as a PR stunt, Canney said he still believes it is.

“It’s a PR stunt to appease people who are looking for change. … But I cannot see it happening without a plan,” he said.

Cullinan, the head of the IFA that represents most of the Irish farmers, told The Epoch Times that farmers had been prepared to take on a 22 percent target, which would be “hugely challenging,” and a 25 percent reduction would be “extremely difficult and challenging for the agri-sector to achieve.”

Cullinan said farmers have already “adopted a lot of new measures to reduce emissions” such as turning to protected urea fertilizers instead of calcium ammonium nitrate, using low emission spreading techniques to apply organic fertilizer and agreeing to reduce the use of inorganic fertilizer by 20 percent.

He’s also optimistic about eventually reducing biogenic methane emissions, but said farmers “need time” for new technologies being trialed, such as feed additives for cows, to come to fruition.

According to Cullinan, there’s also a proposal for farmers to build anaerobic digesters, which would turn manure, grass, and crops into fuel, but the resulting emissions reduction would be calculated in the energy sector rather than agriculture.

Cullinan said he believes anaerobic digestion is a “useful project” during the current energy crisis, but it’s also going to put pasture-based farming “under more pressure” because less grass and crop would go to animal feed.

“If you look at sustainability, there are three pillars: the economic, social, and environmental,” Cullinan said.

He argued that the government has not complied with its own climate law that requires it to consider the social and economic impact and the carbon leakage risk before implementing climate measures.

Asked what would the social and economic impact the emission reductions would have on the sector, Culligan referred to a report (pdf) published last year by KPMG Ireland, and said the IFA had been “consistently asking” the government to carry out its own economic and environmental assessment, which “the government [has] failed to do.”

According to the KPMG report, based on the technology last year, a 30 percent reduction in emissions is estimated to require a 20 percent cut of cattle herds—22 percent of beef herds and 18 percent of dairy herds—as well as a 5 percent cut of sheep, pigs, and poultry. It’s also estimated to wipe out between 48,400 to 56,400 full-time jobs.

Cullinan said that the cost of producing food is already going up due to the soaring inflation, and the European Union’s Common Agricultural Policy fund, which was used to compensate farmers to produce affordable food, has been increasingly used on environmental measures.

“Thus for farmers to continue doing what they’re doing, there’s going to have to be food inflation. Somebody is going to have to pay more for the food,” he said. “You can’t expect anybody producing food and not make a margin from it.”

Asked if young Irish farmers are turning their backs to the sector as a result, Cullinan said: “It’s a challenge. In Ireland, similar to other countries across Europe, the age of farmers is getting older. And that’s why it’s very important … [to] ensure that there is a pathway or roadway for young people that want to come into agriculture.”

“I believe, in life, there are two essentials for everybody. Number one [is] to have shelter and the second one is that everybody will have enough to eat,” he said. “I think in this debate, it’s important we keep all of those things in mind as well.”

Canney also said that if herds have to be culled, farmers’ income and food production will be reduced, food prices will go up, and the market will be distorted to allow carbon leakage.

“And we will have other competitors coming in and some of them may not be producing beef like we’re producing it, and we’ll end up with a situation where we’ll be adding to the carbon footprint globally by doing something like this,” Canney said.

But if Ireland reduces its dairy and beef production, “that food would be produced someplace else, probably in Brazil in the Amazon region where there was no regard for any kind of carbon emissions,” he said.

Cullinan also argued the government failed to consider “the way that biogenic methane is treated.”

Some 60 percent of Irish agriculture’s greenhouse gas emissions are biomethane from cattle and sheep.

Methane is a “short life cycle gas and if you’re not increasing, then you’re not adding to global warming, he said, referring to an argument by Myles Allen, professor of Geosystem Science at Oxford, who said steady levels of methane emissions don’t have as much warming effect as it’s advertised, given it’s short-lived in the atmosphere.

According to official figures, in 2018, Ireland’s agriculture emissions add up to about 22.3 megatons of CO2, representing 35.2 percent of all emissions in Ireland and less than 0.07 percent of the global emissions that year.

Assuming there will be no carbon leakage, reducing a quarter of emissions in Irish agriculture would mean less than 0.02 percent of the reduction in global emissions.

Asked if it will make any meaningful impact on temperatures, Canney replied, “absolutely not” unless “big powers like the United States, China, and South America, and Asia, and Africa all come on board.”

Asked how the other sectors are to meet their emission reduction target without blackouts or other disruptions, Canney said the targets seem to be a “knee-jerk response … which I don’t know they can be achieved without having a plan, and as well as that, it’s going to cost a lot of money to put that plan in place.”

Emission reductions in transport and buildings heavily rely on using electricity as an energy source instead of fuel, but Canney said Ireland has “a complete lack of understanding of what we need to do if we’re to get wind energy” and has been “far behind” in developing renewable energy in general.

Citing an example from his own constituency, Canney said a local wind farm has to be decommissioned, “with the loss of energy for 64,000 houses.”

The 70-turbine Derrybrien Wind Farm, located in Derrybrien, south Galway, caused a massive landslide in October 2003 when tonnes of peat were dislodged and polluted the Owendalulleegh river, resulting in the death of 50,000 fish.

The Irish government has been fined €5 million by the Court of Justice of the European Union for not carrying out an impact assessment study ahead of the project.

In March this year, ESB, the state-owned electricity company that constructed the project, said it will decommission the turbines.

Canney said he believes there’s a “huge potential in the Irish Sea and in the Atlantic Ocean” to build off-shore wind farms, and that Ireland needs to explore hydro generation and other energy sources, but they will take time.