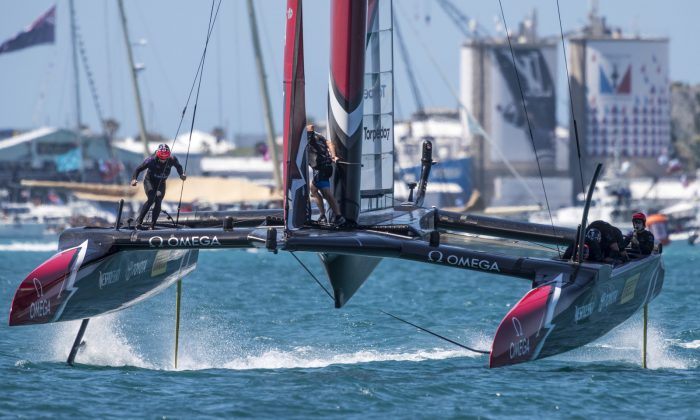 BERMUDA—Peter Burling helming Emirates Team New Zealand has opened up a 3 point lead against defending champion Oracle Team USA in the Louis Vuitton America’s Cup in the first two days of the competition which started on June 17.

Oracle Ram US had been sitting on the side lines while the Emirates Team New Zealand battled away to win the Challenger Semi-finals and final for the right to challenge Oracle Team USA for the actual 2017 Louis Vuitton America’s Cup, they were fired up and ready to go. But it seems to be taking a little time for Team USA to back in peak racing mode.

Team New Zealand won all 4 races on the first two days of the main competition giving them 4 points, whereas the only point in the bag for Oracle is the one they were awarded for winning the Challenger Qualifiers, leaving Team New Zealand 3-points in the lead.

Both teams have been taking another break this week before the final 9 races are run from Saturday June 24 to Tuesday June 27.

In the meantime the J Class America’s Cup regatta was run on Monday and the finals of the Red Bull Youth America’s Cup took place last Tuesday and Wednesday.