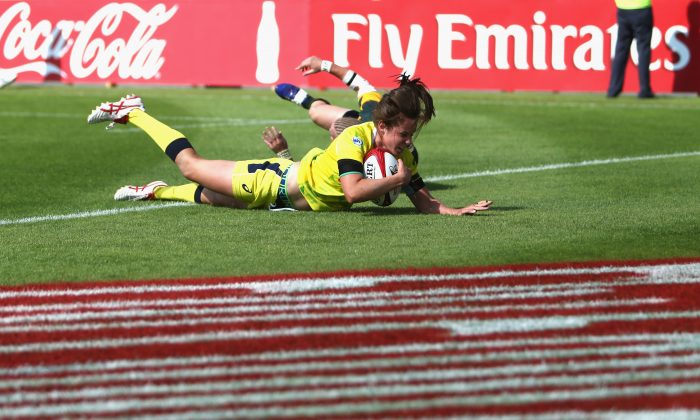 Dubai Rugby Sevens 2014 weekend, the biggest sevens tournament in the world with a huge number of teams taking part on seven pitches started yesterday Thursday Dec 4 and goes through until Saturday Dec 6. Many of these matches are for lower level competitions but of the two main events are the Men’s HSBC Rugby World Series and the IRB Women’s Sevens World Series.

The Women’s World Series matches started yesterday, Thursday Dec 4 and the Quarter Finals, Semi-finals and Final will be played today Friday Dec 5. The Quarter Final schedule line-up is Australia verses Fiji, USA against Canada, England play France and New Zealand meet Russia. Hong Kong is not represented but China will play South Africa in the Quarter Final of the Bowl competition. Dubai Sevens is the first leg of a six leg series for the women’s competition with further rounds to be played in Brazil, USA, Canada, England and Netherlands.

The women’s Fiji 7’s team that gained entry to the World Series by winning the Qualifier competition in Hong Kong in September 2014 were defeated by England and Canada but won against Brazil to put them into the Quarter Finals. Fiji play Australia in the Cup Quarter Finals. China, runners up in the Hong Kong Qualifier play South Africa in the Semi-final of the Bowl competition.