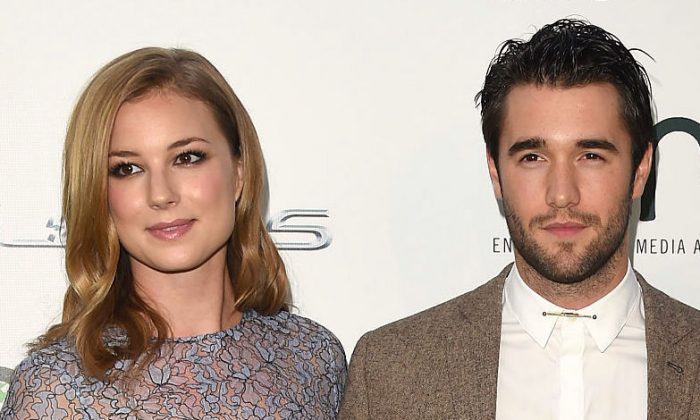 Emily VanCamp and Josh Bowman of Revenge Marry in Bahamas

Emily VanCamp and Joshua Bowman, co-stars of the ABC drama Revenge, married in the Bahamas on Dec. 15.

The wedding ceremony was held on Harbour Island in front of family and friends, according to U.S. Weekly and People.

The Canadian actress pleased fans on Dec. 16 when she shared two wedding photos on her instagram. It showed her in an elegant white dress and veil as she held hands with the British actor.

Thank you to all of our friends and family who made their way to celebrate with us! We are eternally grateful. And to @lelarose and your incredible team for creating my dream dress… Thank you times a million 💕💕💕 📷 @charliedailey

The two were known to have been dating as early as January 2012, when U.S. Weekly broke the news.

They became engaged in May 2017. VanCamp made the announcement on her Instagram page with a photo of her standing in a forest while holding her hands up to show her sparkling engagement ring.

“It was in a forest. We were in nature on a hike, kind of doing what we do, it was very, sort of, us. So yeah, it was great, beautiful.”

Just a few days after the engagement, VanCamp shared about her excitement.

“It’s literally only been a couple of days, but it’s amazing,” she told People at the time. “I’m really happy!”

On the ABC drama, the two had played the characters Emily Thorne and Daniel Grayson who tied the knot in the third season. But the on-screen relationship did not turn out well—Grayson shot Thorne soon after the exchanging of vows, for Thorne’s betrayal.

VanCamp told Elle Canada in March 2014 about how she would joke about Bowman’s “wife-beater” role on Revenge.

“Josh and I keep it all very separate,” she told Elle Canada about their private lives and the show. “I barely talk about him in interviews, to be honest. It’s just really funny in the moments when we’re playing these absolutely absurd things. I call him ‘wife-beater Daniel.’

“It’s hard for my family to watch—it’s also hard for them to see me in that light. But we’re actors. None of that lives in any of us, thank God!”

Later in 2014, she shared her thoughts on starting a family.

“Yes, absolutely, especially when your sisters are having babies you just want to jump on the bandwagon,” VanCamp said during a September 2014 appearance on The Meredith Vieira Show, according to U.S. Weekly. “But I’m just happy being an auntie right now.”

“I’m really busy and I feel like I kind of want to be the kind of mom I want to be. With this schedule and playing this very tortured—exciting to play, but crazy character—I think I’ll let that happen and I’ll see where I’m at,” she added.

Since Revenge ended, VanCamp has starred in Captain America: The Winter Soldier and Captain America: Civil War, and currently stars in a new series called The Resident. Bowman has since starred in Time After Time, Doctor Who, and Lore, among other roles.

In May 2018, VanCamp shared a photo of herself and Bowman marking one year since their engagement.

Ride or die 🖤 A year ago today I said yes to this man. Wouldn’t want to do life with anyone else.

“A year ago today I said yes to this man,” the photo caption read. “Wouldn’t want to do life with anyone else.”