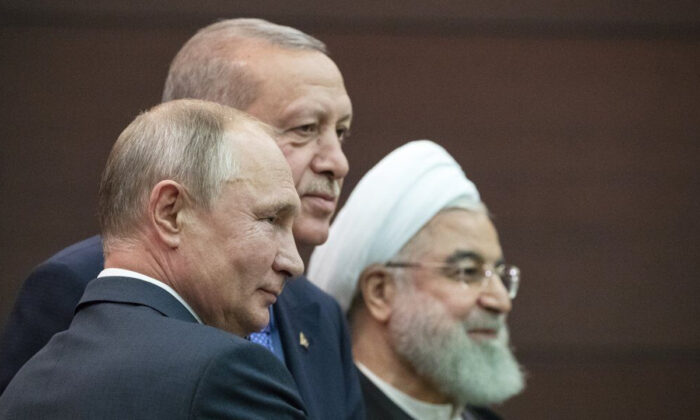 Emerging Russia-Iran-Turkey Axis Can Be Dangerous for US: Expert

As the attacks on Saudi oil facilities push the Middle East back into the limelight, President Donald Trump faces a stalemate. A looming threat from a defiant Iran and its proxies and a growing dynamic between Russia-Iran-Turkey is the “biggest challenge in the region for the United States since the Iranian Revolution in 1979,” according to an expert.

Iran has always been a major challenge for the United States in the region and a Center for Security Studies (CSS) analysis (pdf) says the U.S. 2017 National Security Policy mentions Iran 17 times and prioritizes the need to prevent the predominance of  “any power hostile to the United States,” a reference to Tehran.

“President Trump clearly states that U.S. interest in the Middle Eastern oil has diminished and he does not intend to be the one to send American troops into conflicts for the protection of Middle Eastern countries.

“However, the events and conflict with Iran make it difficult for the U.S. administration to implement this policy and it is forced to take steps, including recently, to reinforce additional forces in Saudi Arabia against its will and interests,” said Shavit.

“That is why the Trump administration is pressing hard against Iran on all economic fronts and will have to pursue this path until Iran buckles up,” he said.

Trump pulled the United States out of the old 2015 nuclear deal and re-imposed sanctions on Tehran last year. He has also gradually tightened sanctions on the Islamic regime since then.

On Feb. 11, Trump designated Iran’s Islamic Revolutionary Guard Corps (IRGC) as a Foreign Terrorist Organization. In a statement, Trump said, “Iran is not only a state sponsor of terrorism, but that the IRGC actively participates in, finances, and promotes terrorism as a tool of statecraft.”

Kanishkan Sathasivam, Director of William H. Bates Center for Public & Global Affairs at Salem State University, said Iran is currently one of the strongest states in the region. “Its allies and proxies in all four ‘contested’ states–Iraq, Syria, Lebanon, and Yemen–have been steadily gaining power in recent months,” he said.

He explained that since the economic sanctions are hurting Iran, Iranians understand that their current strong position could be just “fleeting.”

“So they may be tempted to strike now while they still retain their advantageous position,” said Sathasivam.

Md. Muddassir Quamar, a visiting fellow at the King Faisal Center for Research and Islamic Studies in Saudi Arabia and a fellow at Institute for Defence Studies & Analyses in New Delhi, said there’s no significant change in the U.S. security policy under Trump when it comes to dealing with Iranian proxies.

“The notable change in vis-a-vis how to tackle Iran and its growing regional influence through the proxies. A major aspect is stringent and extraordinary economic sanctions so as Iran is unable to easily go on with its business of popping up and strengthening proxies throughout the region,” he said.

Center for Strategic and International Studies (CSIS), says the U.S. sanctions have impacted the Iranian economy and “the IRGC is particularly vulnerable to an economic slowdown because it owns a vast empire of businesses and foundations, from construction companies to petrochemical and cement companies.”

CSIS, however, says that despite withdrawal from the nuclear deal and renewed sanctions, the Iranian activism in the region is growing and the country is also establishing a land bridge across the region for fighters and materials.

Sathasivam said one thing that is significantly different between what Obama faced and Trump faces is the growing estrangement of Turkey from the United States and the West overall. He says it’s the “biggest challenge in the region for the U.S. since the Iranian Revolution in 1979.”

Gunasti said the Russian-Iran-Turkey nexus has existed for two years and the three countries recently had their fifth meeting in Ankara.

“Turkey has been estranged from the U.S. thanks to the Obama administration. President Trump maintained [an] open communication line with President Erdogan since his first day. Since then they have covered lots of ground as two long-time and staunch allies to remedy as much as they can in two years what was destroyed in the past 20 years or so due to the globalist U.S. administrations,” he explained.

He said if Trump and Erdogan keep talking often, the United States will maintain its superpower status in the Middle East.

“Iran will continue to be the biggest problem for the U.S. foreign policy objectives in the region. The only and the best alternative for the U.S. is to cooperate with Turkey.

“Without either Russia or Turkey working in tune with the U.S., Iranian problem as we know it will never end, be it nuclear Iran or what is thought to be Iran behind the Yemeni war or the drone attacks in Saudi Arabia,” he said.

According to Sathasivam, the emerging Russia-Iran-Turkey connection is more an alignment of interests and not a true alliance and he suggests that Trump keep the lines of communication open with both Russia and Turkey.

“But Turkey still has significant differences with Russia and Iran on Syria and the Kurds. And of course Turkey remains a NATO member, and as such cannot enter into a potentially rival alliance without having to leave NATO.

“As for potentially sparking a war, what I mean is that Iran, for example, may overestimate Russia’s alignment with Iran and as a result be more willing or emboldened to push the red lines of Saudi Arabia or Israel or even the U.S., and this then may result in a war of miscalculation,” he said.