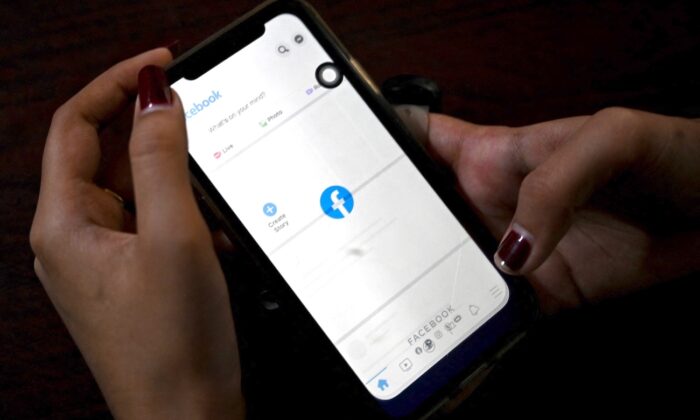 A woman uses her mobile phone to check Facebook. (STR/AFP via Getty Images)
US

A battle over the cellphone data of “Juror X,” who repeatedly posted on Facebook about her involvement in a high-profile Ohio case, has intensified.

In a recently released order, Judge Douglas Cole allowed prosecutors and defense lawyers to question two more jurors about possible improper influences during the trial of P.G. Sittenfeld, a former Cincinnati city councilman convicted of a pair of corruption charges last month. His trial was held in Cole’s courtroom in the U.S. District Court for the Southern District of Ohio, Cincinnati.

Earlier this month, Cole refused to allow forensic examination of Juror X’s cellphone, prompting Sittenfeld’s lawyers to escalate that request to the U.S. Court of Appeals for the Sixth Circuit. The attorneys seek an emergency order because “the electronic communications at issue are highly likely to be lost or destroyed if not produced immediately,” an Aug. 15 appeals court filing says.

Prosecutors must respond by Aug. 23; a decision is expected soon after that.

Sittenfeld’s lawyers pointed out that the Sixth Circuit handled a similar case last year; the judges overturned a Tennessee couple’s convictions because of concerns about a juror’s communications and destruction of cellphone data.

“This Court’s holding in [the Tennessee case] makes clear that Mr. Sittenfeld’s right to relief is clear, indisputable, and appropriate under the circumstances,” Sittenfeld’s lawyers wrote.

The controversy over Juror X dates to July 8, just before the verdict was announced in Cole’s courtroom. A courthouse staff member reported that Juror X had posted on Facebook throughout Sittenfeld’s trial, despite the judge’s repeated warnings that jurors were barred from communicating with anyone about the case.

In a recent opinion, Cole stated, “Juror X violated the plain language of the court’s instruction,” but he found no proof that she was improperly influenced against Sittenfeld. Right after the verdict was read, Cole allowed lawyers to question Juror X, who had communicated with at least 29 non-jurors via social media during the trial. Juror X also suggested that Juror Y “might harbor a general bias against politicians.” As a result, Juror Y was also questioned in a behind-closed-doors hearing.

In an Aug. 3 order, Judge Cole allowed lawyers to question two other jurors about any possible improper influences. The judge initially filed that order under seal, and local news media were fighting to have it unsealed.

But on Aug. 18, The Epoch Times discovered that the previously sealed order was publicly accessible online; it was unclear when the document was made public. However, the document describes circumstances that would have triggered it to be unsealed.

Cole wrote that the seal would be lifted after lawyers in the case finished interviewing the two additional jurors, who were to be selected by Sittenfeld’s attorneys.

That procedure represented a compromise, the judge wrote. Cole didn’t want to grant “free-wheeling access” to jurors’ information, but he did believe that Sittenfeld’s lawyers were entitled to explore “whether the jury improperly considered extraneous information.”

Making the decision public before lawyers talked to the two jurors may have tainted their testimony, Judge Cole wrote. He called the temporary seal “a narrowly tailored solution that will protect the integrity of the process while inflicting the least damage on the public’s right to transparency in criminal proceedings.”

Cole wrote that he would separately consider whether the two jurors’ statements should be sealed. As of Aug. 18, publicly available court records did not appear to address that issue.

So far, four of Sittenfield’s 12 jurors—one-third of the panel—have been subjected to post-trial questioning about any improper influence on the verdict. Legal observers say that these complications could have been avoided if Juror X had abided by the judge’s order to refrain from communications.

Mark Krumbein, a Cincinnati-area lawyer for almost four decades, said: “It’s amazing and also upsetting. For some reason, there seems to be a constant pushback from jurors … There’s a tendency for the jurors to just ignore the judge’s strict instructions. It should be simple, that they’re not supposed to get any extraneous information from any source about what they’re dealing with in court.”

Ken Katkin, a law professor at Northern Kentucky University, opined that Juror X invited the intrusion into her private cellphone contents because of her actions.

Interestingly, Katkin said, Sittenfeld would not be fighting to get the juror’s phone if his case were happening “anywhere other than the Sixth Circuit,” which includes cases from Ohio, Kentucky, Tennessee, and Michigan.

In federal appellate courts covering the remaining 46 U.S. states, judges presume that any external juror communication did influence the verdict—and the burden is on prosecutors to prove that it did not, Katkin said. In those states, “the prosecutors would be arguing to get the juror’s phone,” Katkin said. “It’s the side with the burden of proof that has to find the evidence.”

In the Sixth Circuit, the presumption and the burden are both flipped; the defense must overcome a presumption of no influence, and prove that jurors’ external communications did change the trial’s outcome.

Because Sittenfeld faces that hurdle, Katkin believes he should be entitled to dig into the juror’s phone.

“If he has the burden of proof, he should have the tools that he needs to collect evidence,” Katkin said.