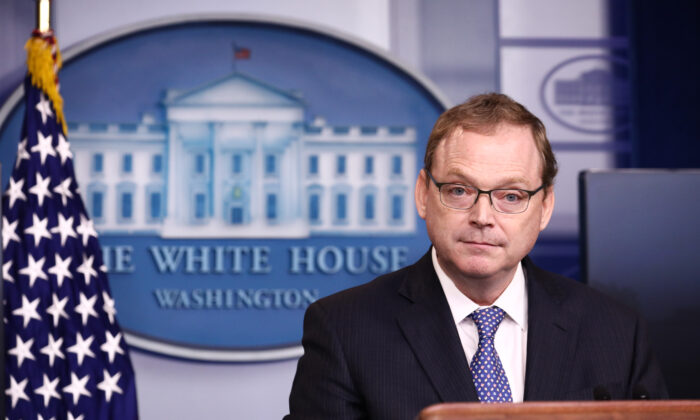 Kevin Hassett, Chairman of the Council of Economic Advisers speaks during a press briefing at the White House in Washington on Sept. 10, 2018. (Samira Bouaou/The Epoch Times)
AMERICA

Emergency Funding for States Might Not Happen Right Away, White House Adviser Says

“I think that it’s just premature, given that the $9 trillion of aid that passed in the last three phases, given that that is still out there and there’s still a bunch of it that’s going to be delivered over the next month, we think we have the luxury of a moment to learn about what’s going on so the next step we take can be prudent,” Hassett told CNN on Sunday.

The White House wants more details on the measure, as cash that was unsealed under prior relief bills is being distributed. Last month, Congress passed a $2.2 trillion stimulus package that sent up to $1,200 to individuals, granted loans to small businesses who need assistance, provided relief to local and state governments, and more.

Those measures were passed to head off economic losses suffered amid the CCP (Chinese Communist Party) virus pandemic.

A fourth stimulus bill is still being considered, Hassett said, but President Donald Trump wants to sign the right package.

The president said as much on Friday, telling reporters that White House officials are “in no rush” to pass more stimulus measures.

“Of course if we go to a phase four deal, I think President Trump has signaled that while he doesn’t want to bail out the states, he’s willing to help cover some of the unexpected [COVID-19] expenses that might have come their way,” Hassett said.

Democrats such as House Speaker Nancy Pelosi (D-Calif.) have said that state and local governments could need as much as an additional $1 trillion in aid. A vote on such a measure could come as soon as next week.

“With millions of Americans out of work and millions more suffering, we must act with courage, strength and urgency to provide the support that the American people need to protect their lives and livelihoods,” she said in a statement on May 8 in response to an employment report released by the Labor Department. It showed that the United States lost more than 20 million jobs in the past eight weeks or so.

House Majority Leader Steny Hoyer (D-Md.) told members in a conference call that he hopes the House of Representatives could vote on a CCP virus package, CNBC reported. The bill could approach $2 trillion dollars.

But other White House officials have said there have been few negotiations recently.

“We’ve kind of paused as far as formal negotiations go,” White House adviser Larry Kudlow, director of the National Economic Council, told reporters. “Let’s have a look at what the latest round produces, give it a month or so to evaluate that.”