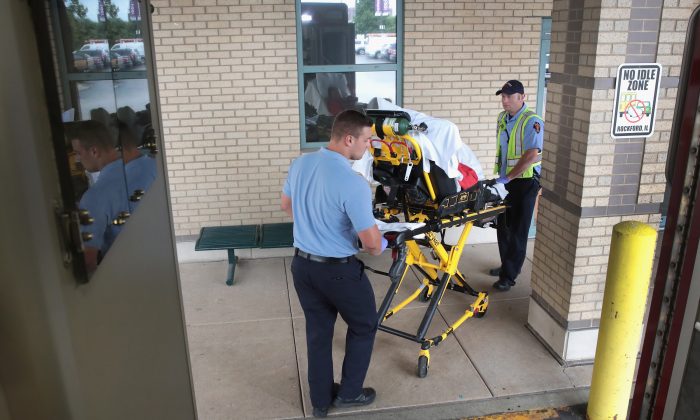 Firefighters transport an overdose victim to a hospital emergency room in Rockford, Ill., on July 14, 2017. The woman was found on the floor of the hotel room in which she lived after taking an overdose of prescription medication and alcohol. (Scott Olson/Getty Images)
US News

Emergency Doctors Caught in the Middle of Opioid Crisis

A 22-year-old with severe bipolar lives too far away from public transport. When she can’t get her medications, her dealer shows up with heroin—it helps stop her mind from racing for a little bit.

An 18-year-old wants to relax and have a good sleep before his apprenticeship exam, so that he does well and can help his mom pay rent next week. He buys the anxiety medication Xanax off a friend, but neither knows the bar is laced with fentanyl, a deadly synthetic opioid.

All three end up in the emergency room after overdosing and being revived with naloxone, the opioid antidote.

Dr. Krista Brucker, an emergency room physician at the Sidney & Lois Eskenazi Hospital in Indianapolis, Indiana, was there afterward to hear their stories.

Brucker is also the medical director for Project Point, an initiative that is trying to find ways to bridge the gap between the emergency room and treatment for substance abuse.

“We do naloxone education, HIV and Hepatitis C testing, and then try and link people into ongoing treatment after that intervention in the emergency department is complete,” she said at a panel discussion at the annual American College of Emergency Physicians (ACEP) conference on Oct. 30.

“The [overdose] numbers are scary,” she said. “They really completely fail to communicate the levels of suffering that are going on. In Indianapolis, we are completely overwhelmed by this problem.”

Every state has issues with opioid addiction, and emergency physicians are on the front line of the crisis. In 2016, more than 64,000 Americans died of a drug overdose and an estimated half of those deaths were attributed to opioids.

The ACEP recently polled more than 1,200 emergency physicians to find out what is happening in emergency departments across the country.

“The results are very discouraging,” said Dr. Paul Kivela, president of ACEP. Eighty-seven percent of the physicians said the problem with opioids was either increasing or remaining steady in their location.

“Over half—57 percent—said there are inadequate detox and treatment centers out there,” Kivela said.

Scott Weiner is an assistant professor at Harvard Medical School and author of a study that looked at the one-year mortality rate of people who had survived an overdose after being given naloxone by emergency services.

“It’s common for emergency physicians to be keeping an eye on a patient who has just been revived with naloxone, by just observing them in the hallway, letting them sober, while busy taking care of other emergencies like heart attacks, traumas, and strokes,” he said.

The study, conducted in Massachusetts, looked at the patients who received naloxone over a 2 1/2year period—a total of 12,192 naloxone administrations.

“Our group hypothesized that that individual sobering in the hallway of the emergency department has perhaps one of the highest one-year mortalities of any of the patients being seen in the emergency at that moment,” Weiner said.

Excluding the 6.5 percent who died the same day, about 10 percent of the patients who initially survived were dead within one year, he said. And more than half of those died within a month.

“The opioid overdose patient, who sobers in the hallway, is offered a detox list, and then is discharged, has a 1 in 10 chance of being dead within one year. And their highest risk is within the first month,” Weiner said.

Weiner said he thinks the study grossly underestimated the number of deaths attributable to opioids. Forty percent of deaths within the first year were opioid related, according to death certificates, he said.

But he thinks many deaths are not listed as opioid-related. “If someone dies from an overdose, first their breathing stops, then their heart stops, and [doctors] might list the cause of death as cardiopulmonary arrest,” he said.

Brucker agreed. “A lot of families don’t want overdose or opiate overdose on the death record. And a lot of physicians are hesitant to put it there.”

She said using big databases for such studies can be limiting. “Even as scary as the numbers are, they’re probably huge underestimates of the actual problem.”

She said that in larger urban areas, up to 50 percent of patients who are given naloxone for an overdose subsequently refuse transport to the hospital. And then there are other patients who are revived with naloxone administered by a family member or bystander and EMS is not even called.

Patients surveyed by Project Point have overdosed seven times each, on average, she said.

Kivela said it is a great step that President Donald Trump designated the opioid crisis as a nationwide public health emergency on Oct. 26.

The biggest problem right now, according to emergency physicians, is a dearth of treatment programs, he said.

“We need to expand resources, or expand our capabilities, or expand our scope of care. And that’s something that I think the president and the government needs to assist us on,” Kivela said.

Weiner agreed. “The most important thing is the resources that this is going to take. I heard that we spent about $3.5 billion in the Ebola response—we had two people in this country die from that,” he said.

“Patients who survive an opiate overdose need to be considered extremely high risk and should receive interventions like offering buprenorphine, offering counseling, and referral to treatment, prior to discharge from the emergency department.”

Buprenorphine is an opioid medication used to treat opioid addiction.

One of the priorities in Trump’s opioid plan is to increase access to medication-assisted treatment.

Weiner said several emergency departments in the country have started Suboxone treatment directly, which stops patients from suffering the withdrawal symptoms that often make them leave and start using again.

“But even that’s not enough,” he said. “We need to be able to start them in the emergency department and say, ‘Tomorrow, you can come to this clinic, and we will take care of you and help you.’ And that clinic basically has to be there if they’re ready or not. Some patients aren’t going to be ready.”

In Brucker’s project, the interviews with patients go a bit deeper, ”to try to figure out what else is going on, what other things need to be addressed,” she said.

She found that about 55 percent of her patients have a mental health illness, or have been treated for one in the past.

A survey she does with her patients is called the Adverse Childhood Experiences (ACE) score, which is 10 questions asking about abuse, neglect, and household dysfunction.

“These are things like physical, sexual abuse … and neglect. And then measures of household dysfunction, like if a parent or a caretaker was incarcerated, or if there was domestic violence in the home,” she said.

“We know from other studies that patients with scores of four or higher on this scale are at higher risk for all kinds of diseases, including cancer and COPD—as well as injection drug use.”

Brucker said 60 percent of the patients who completed the ACE questionnaire had scores of four or more.

“So this is not just an opiate crisis, it’s a lot of untreated mental illness and a lot of household, childhood experience dysfunction. If we’re going to make meaningful interventions in the emergency department, we’re going to have to take these things into account,” she said.

“Tracing the steps back to what causes addiction, there are as many paths into addiction as there are out.”

Only 10 percent of the nearly 21 million citizens with a substance use disorder receive any type of specialty treatment.

Testing pain, however, is not a simple measure, unlike pulse, blood pressure, temperature, or respiratory rate. When an emergency department doctor asks a patient what level of pain they feel on a scale of one to 10, “we frequently get 11, 12, 14,” Kivela said. “And the person’s just walking around looking fine. So it’s very individual and perceptual.”

Kivela said that was one of the first problems. The second, he said, is the pharmaceutical industry.

“A lot more medicines were manufactured and marketed, and there was a lot of direct consumer marketing as well,” he said.

On top of that, satisfaction surveys became popular and helped propagate the overprescription of pain pills to keep patients happy.

“In some respects, physicians felt like [they] were forced to write a prescription,” Kivela said.

Several initiatives have been set up to curb painkiller prescriptions.

Attorney General Jeff Sessions announced in August the formation of a unit that will investigate the overprescribing of opioids within the health care system.

Previously, only long-acting opioids—about 10 percent of opioid prescriptions—were subject to strict regulation by the Food and Drug Administration. Recently, that was expanded to include immediate release opioids. The new requirements will make all opioids that are manufactured subject to the same strict regulations.

The National Institutes of Health has initiated discussions with the pharmaceutical industry to establish a partnership to investigate nonaddictive pain relievers and new addiction and overdose treatments, as well as a potential vaccine for addiction.

The Department of Defense, Department of Veterans Affairs, National Institutes of Health, and Department of Health and Human Services are collaborating on a six-year, $81 million joint research partnership focusing on nondrug approaches to managing pain in order to address the needs of service members and veterans.