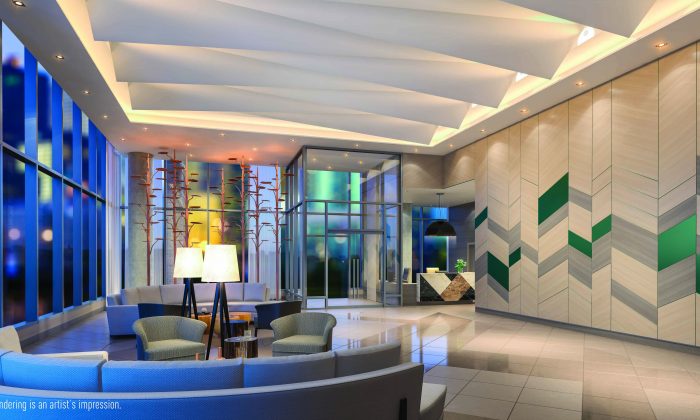 Rendering of the lobby at Fifth on the Park. (Courtesy of ELAD Canada)
Canadian Content

ELAD Canada readies to launch Fifth on the Park, the next building at its master-planned community
By Ryan Starr
biggersmaller
Print

The area around Don Mills and Sheppard has undergone a big transformation in the past decade, and the emerging Emerald City on the intersection’s southeast corner is playing a major part in the metamorphosis.

“When we first acquired the property (formerly known as Parkway Forest) 10 years ago, residents were less than happy with the way the neighbourhood looked and the kind of lifestyle and activities going on there,” explains Rafael Lazer, CEO of ELAD Canada, developer of Emerald City, the shimmering new master-planned community that’s replaced the tired 1960s-era apartment buildings. “What we’ve done is uplifted the area.”

Emerald City’s first phase, now complete, included three towers, and Lazer says the project team managed to sell and deliver 1,200 units in a single year. “That’s quite an achievement for a company our size,” he tells the Epoch Times in an interview at ELAD Canada’s head office on Sheppard Avenue East.

Launched in 2008, Emerald City will ultimately include about 2,800 condo suites in nine towers and 11 townhome condo units, along with a purpose-built rental tower and four rental replacement buildings.

Construction began earlier this year on the first building in the community’s second phase, The Colours of Emerald City.

And this fall ELAD is gearing up to launch the next building in that block, Fifth on the Park, with about 263 units that start in the mid-$200,000s.

Most units at Fifth come with balconies, laminate flooring in the principal rooms, and in-suite stacked full-size washer and dryer. Kitchens come with stainless steel appliances, quartz countertops, and in some cases a portable and extendable island. Bathrooms will have a glass shower stall and some units will have a soaker tub and selection of porcelain tile flooring.

Fifth on the Park’s amenities, some of which will be shared with The Colours of Emerald City, include the usual stuff (indoor pool, hot tub, fitness room, lounge and dining room, terrace with barbecue) and more unique offerings, like a karaoke-theatre room and arcade room, plus a WiFi lounge off the lobby. Residents can also take advantage of the new Parkway Forest Community Centre, which includes a YMCA-run daycare and full gymnasium. A separate aquatic centre with outdoor pool is under construction.

Earlier releases at Emerald City have proven popular with Chinese buyers, but Lazer stresses the community is getting interest from a cross section of purchasers “as diverse as Toronto is. It’s mirroring the city.” It’s attracting buyers at every stage of life, too: empty nesters, young families with kids, first-time buyers, and students. “We see it all,” says Lazer.

And while Emerald City has been appealing to investors given the transit tie-in, competitive pricing, and anticipated high rents, “you’d be surprised how many end users buy here. More than at your typical downtown project.”

Emerald City is a stone’s throw from the Don Valley Parkway/Highway 404, with quick connections (on a good day) to Highways 401 and 407. “It’s probably the best location on the Sheppard corridor. It takes full advantage of everything around it.”

When Lazer talks about uplifting the area, he’s not just speaking in the abstract. He notes that homeowners in the neighbourhoods in and around Don Mills and Sheppard have enjoyed some of the best price appreciations in the GTA.

“That’s not just because we built a nice condo project,” he acknowledges. “It’s because of everything—the subway station, the renovated mall…

“When you change the demographics of a neighbourhood and invest in the infrastructure and facilities, you make it a more desirable and attractive place. We brought it all together and that’s why there are so many new people coming here.”

Earlier this year ELAD and its community partners celebrated the official unveiling of Emerald City’s much ballyhooed public art installation: a series of landscape sculpture works by celebrated Canadian artist Douglas Coupland. One of them, “The Four Seasons”—inspired by pencil crayons—features a series of tall cones that form a mountain range that runs through Emerald City’s northwest corner.

“The response has been overwhelming,” says Lazer. “We have people coming from around the city to just look at it.”

“It does a good job of representing the message we want to send about this project,” he adds. “It’s about the cycle of life and rejuvenation.”