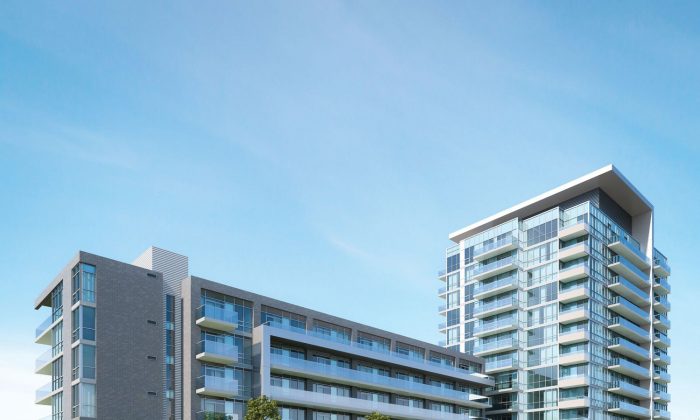 The exterior of Biyu at The Colours of Emerald City, a 13-storey mid-rise building that will have suites ranging from 506 square feet to 1,265 square feet with nine-foot ceilings, laminate flooring in principal rooms, and a choice of broadloom in the bedrooms. (Emerald City Developments)
Canadian Content

Biyu at The Colours of Emerald City, a mid-rise condo, is the latest release in master-planned development
By Special Feature

Barbara Lawlor has been thrilled to witness the birth of ELAD Canada’s Emerald City.

“It’s incredibly exciting to watch a new community come alive,” says the president and CEO of Baker Real Estate, who is managing sales for the master-planned development at the southeast corner of Don Mills Rd. and Sheppard Ave. E.

Emerald City has brought big changes to the evolving Sheppard corridor, taking full advantage of a prime location at Don Mills subway station, across the road from a newly expanded Fairview Mall.

To date three towers have been built—representing close to 1,200 units—with full occupancy slated for later this year. A collection of 11 townhomes is under construction. And now Baker is gearing up to launch sales on Biyu, a 13-storey mid-rise building that’s the first of three in the development’s next block: The Colours of Emerald City.

“It’s been a long process and took years to get to this point,” Lawlor tells The Epoch Times. “But to watch each building built, and to see it come alive, and then have people move in and become a real community, it’s fabulous.”

Designed by WZMH Architects, Biyu, which in Chinese means semi-precious stone, will have suites ranging from 506 square feet to 1,265 square feet. Prices start at $259,900 and go to $720,000. (The next two mid-rise buildings will be named The Amber and The Ruby).

Earlier phases of Emerald City have proven popular with Asian buyers and investors, Lawlor says, and she expects Biyu to draw just as much interest.

“They’re very savvy buyers, and the Asian brokerage community is fast coming out of the gates,” she says. “They always recognize a great future opportunity.”

The master-planned project offers what Asian purchasers desire, she notes: a location poised for significant growth and price appreciation; lifestyle amenities and transit access; and, perhaps most of all, affordability with reasonable pricing.

Investors will be lured by the fact that the Toronto rental market is currently sitting at less than 1 percent vacancy. With immigration continuing to flow, Lawlor says, “there’ll be strong demand for rental.”

As a mid-rise building, Biyu offers a more intimate feel, which is appealing to purchasers who are moving from larger homes as well as to those who can’t afford a detached home but don’t want to live in a tall tower.

“Some buyers are more comfortable in a mid-size building,” Lawlor explains.

Suites at Biyu, by II BY IV Design Associates, will have nine-foot ceilings, laminate flooring in principal rooms, and a choice of broadloom in the bedrooms.

Emerald City has earned accolades for its public art installation, by celebrated Canadian artist Douglas Coupland. Dubbed Four Seasons, the whimsical work—inspired by Laurentian pencil crayons—features four brightly coloured conical pylons (from 48 to 60 feet tall) oriented in a perfect line starting at the corner of Don Mills and Sheppard and continuing southeast through the site toward Forest Manor Rd.

Lifestyle amenities at Biyu include an indoor pool and hot tub, his/hers change rooms and saunas, and a fitness centre. There will be a multi-purpose game room, screening room, lounge and a guest suite, as well as a private dining room and outdoor terrace with a barbecue and dining area.

Emerald City Community already has a 50,000-square-foot community centre with a YMCA-run daycare, full gymnasium and will have an outdoor pool upon completion of construction estimated to be in 2015.

There are four schools within close proximity of Emerald City, including one located in the same block, Forest Manor Public School. There’s also an expanded public library across the road, behind Fairview Mall.

Speaking of Fairview Mall, Lawlor points out that the shopping centre has just undergone a $19 million expansion. “It’s like night and day from what it was,” she says, noting that the redevelopment of the venerable mall was spurred in part by the “thousands of people we’re bringing to live here.”

Emerald City’s other advantage is its proximity to the Don Mills subway station located at Sheppard and Don Mills. “And for those who have to hit the highway, the 401, 404 and DVP are all within striking distance.”

Finally, there are the lovely vistas. With Biyu positioned atop the highest point in North York, “that’s something everyone in the building can enjoy,” says Newburg.

Biyu at The Colours of Emerald City