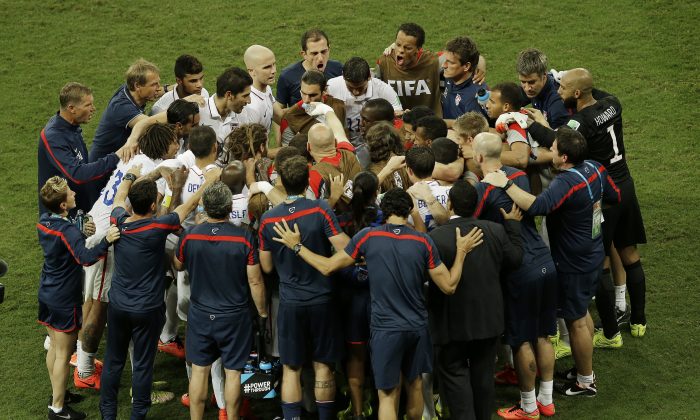 The U.S. team huddles before the beginning of the extra time during the World Cup round of 16 soccer match between Belgium and the USA in Salvador, Brazil, on July 1, 2014. (AP Photo/Themba Hadebe)
Opinion

Embodying the American Spirit on the Soccer Field

While competing at soccer’s World Cup for American glory in sport, Team USA represented to the watching world the glory of American heart and spirit.

Team USA lost on Tuesday, so we have to wait at least another four years for the unprecedented headline “USA Wins World Cup!”

But a clear-eyed look at the American team’s composition and performance reveals a lot about the national character.

One well-known story line has been the five German-born Americans on the team. They proudly wear the red, white, and blue, as does the Norwegian-born player, and also the one with Haitian parents.

The names of other players tell of ancestors hailing from across the globe: Bedoya, Dempsey, Gonzalez, Howard, Zusi.

One player is half Native American, descended from the Kiowa tribe in Oklahoma. His name comes from the other half of his ancestry: Wondolowski.

The story of the World Cup team is a microcosm of the great American story: people of diverse origins joining forces to create and move forward with team spirit and vitality.

With all the bad news from around the nation and around the world, the World Cup team came in the nick of time for many Americans. People gathered in parks and bars to cheer on the team during its four-game run. They snuck out of work or took extra-long lunches, all to watch a group of young men play with locked-in concentration, give-it-all-you’ve got effort, and beaming national pride.

The team gave Americans something positive to rally around, something representing a few great characteristics of America, and something to revive their pride in the United States. The resuscitation of national pride came not in the course of a heavy and grim war, which would have only losers, but instead in a sports competition pitting 11 against 11 on a field of grass, a competition which would have only winners, regardless of the final score.

The American team competed relentlessly, never letting up nor bowing to opponents who possessed clearly superior skills. They lost close matches to Germany and Belgium, and the team was disappointed to leave the tournament with a finish of 15th out of 32 teams. Yet they are toasted across the nation as men who fought hard and honorably, and carried the national banner with distinction.

Team USA never wavered from good sportsmanship. No whining and no excuses, no prima donna acting performances, no fisticuffs—and definitely no biting. They sprang back up when they fell down. They shook hands with the opponent, win, lose, or draw.

The team embodied the never-quit, never-say-die spirit of ancestors who boarded ships to cross oceans looking for a better life in terra incognita.

On Independence Day, all Americans can celebrate and remember the history that brought us here.

Immigrants who come here via the rules and play here—like a high-performing soccer team—via the rules should receive only our welcome.

America has traditionally welcomed those who will work hard and use their ingenuity, talent, and resourcefulness to create something new or make something better, whether it be on the stage, in the laboratory, in the factory, or on the playing field.

The nation asks, “Ready to pitch in?” When the newcomer answers “Yes,” the quick comeback is, “Let’s do it!”

On this Independence Day, let’s remember that—like Team USA—we are all members of a nation of immigrants, a nation built through hard work and pulling together.

John Nania is the editor-in-chief of Epoch Times.