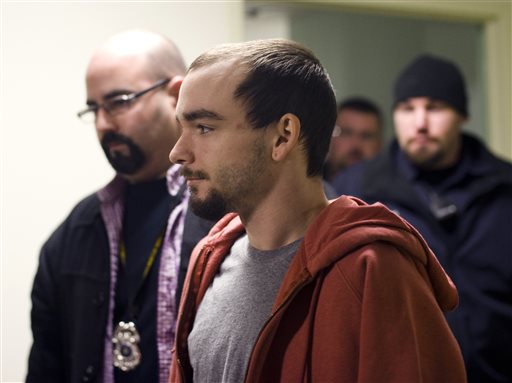 In a Friday, Dec. 6, 2013 file photo, several police officers lead Elyett Barbour from District Justice Benjamin Apfelbaum's office in Sunbury, Pa., after he was charged in the stabbing death of Troy LaFerrara, 42, of Port Trevorton, Pa. His wife, Miranda K. Barbour, was arrested and jailed in December Dec. 2013, in connection with the homicide from early November. In an interview with The Daily Item newspaper published Feb. 15, 2014, Miranda Barbour admitted to the slaying and said she has killed more than 21 others across the country, claims police said they are investigating. (AP Photo/The News-Item, Larry Deklinski, File)
Crime and Incidents

Elytte Barbour responded to the claims from his wife Miranda Barbour that she has killed at least 22 people as part of a satanic cult.

Barbour pleaded the Fifth when asked on Monday what he thought about the claim in the Pennsylvania court room he was in.

However, reporters asked him questions on his way into the hearing.

When asked if he thinks that his wife actually killed 22 people, Barbour said: “Who’s to say?” reported Eyewitness News.

Asked if he thinks that his wife is lying, Barbour said: “I didn’t say that.

Asked if he thinks she’s telling the truth, Barbour said: “Don’t put words in my mouth.”

Miranda Barbour told a Daily Item reporter that she killed at least 22 people and “less than 100” over the years as part of a wicked cult.

However, she emphasized that she only killed “bad people,” or people who abuse children or owe money.

Barbour is a co-defendant in the trial over the murder of Troy LeFerrara in November, and told investigators that he and his wife killed the man because they wanted to kill someone together, according to court papers cited by AP.

The couple were married in North Carolina but the killings allegedly took place in Alaska, Texas, and California as well.