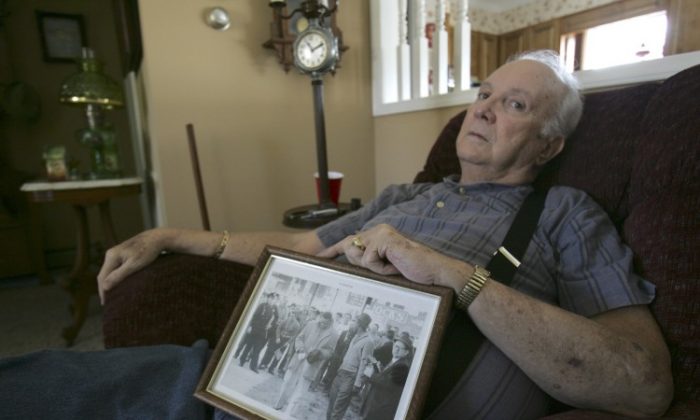 In this Wed., March 4, 2009, file photo, Elwin Hope Wilson holds a framed photo he kept showing a mob he participated in during one of local civil rights "sit-ins" that took place in the early 1960s, in Rock Hill, S.C. The South Carolina man who publicly apologized for years of violent racism, including the beating of a black Freedom Rider who went on to become a Georgia congressman, died Sunday, March 31, 2013. He was 76. (Mary Ann Chastain/AP)
US

Elwin Wilson, the former Ku Klux Klan supporter who publicly apologized for years of violent racism, including the beating of a black Freedom Rider who went on to become a Georgia congressman, has died. He was 76.

Wilson died Thursday at a hospital in South Carolina after a bout with the flu and years of heart and lung problems, said his wife, Judy Wilson.

She told The Associated Press in a telephone interview Sunday that he was relieved he lived long enough to try to make amends for years of racial hatred. He detailed his deeds at length when he called The Herald of Rock Hill to apologize shortly after President Barack Obama’s inauguration in 2009.

“He said he had it on his heart for a long time,” Judy Wilson said. “He said he wished he could find the ones he mistreated and apologize to them all.”

Among his actions were cross burnings; hanging a black doll in a noose at the end of his driveway; flinging cantaloupes at black men walking down Main Street; hurling a jack handle at a black boy jiggling the soda machine in his father’s service station; and the brutal beating of U.S. Rep. John Lewis, D-Ga., at a Rock Hill bus station in 1961.

“His story is a powerful story; his story must not be forgotten,” Lewis told The Herald in a telephone interview Saturday. “His story and the way he arrived at his position must be understood, must be told.”

Wilson also apologized in several other public venues, including during a meeting with Lewis at the congressman’s Capitol Hill office.

In an April 2009 interview with the AP, Wilson tried to explain his remorse.

“All I can say is that it has bothered me for years, all the bad stuff I’ve done,” he said. “And I found out there is no way I could be saved and get to heaven and still not like blacks.”

This month, Lewis received apologies from the current police chief of Montgomery, Ala., and the governor. ButWilson’s apology remains special.

In 2009, Lewis and Wilson accepted the Common Ground Award for Reconciliation at the Canadian embassy in Washington, D.C. Also that year, both were honored in California with awards on Worldwide Forgiveness Day. In Maryland, Wilson presented Lewis with an award. They also told their story to Oprah Winfrey and millions of viewers.