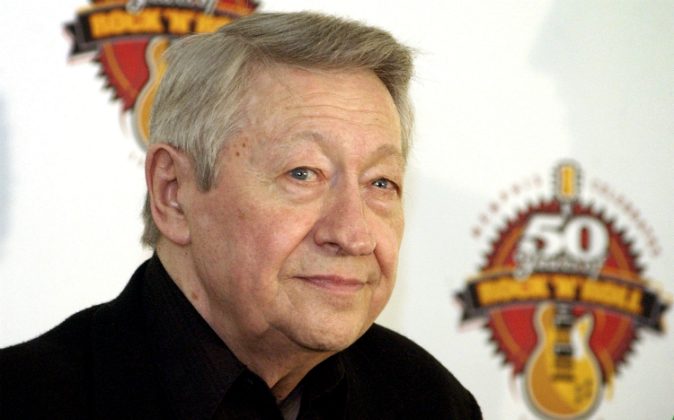 Scotty Moore, the lead guitarist on all the Elvis Presley Sun Records recordings, passed away on June 28. He was 84.

Moore had been struggling with deteriorating health before he died in his Nashville home on Tuesday, according to the Memphis Commercial Appeal. The news of Moore’s death was confirmed by friend and Phillips Recording Service engineer Matt Ross-Spang, via Instagram.

“We lost one of the finest people I have ever met today,” Ross-Spang captioned a photo of the pair. “I was lucky to call you a friend and I’m very glad I got to see you just a few days ago. The guitarist that changed the world… especially mine; I hope you don’t mind if I keep stealing your licks. Love you Scotty.”

Moore, whose full name is Winfield Scott Moore III was born on Dec. 27, 1931, in Tennessee and began playing the guitar at 8 years old. After he was discharged from the Navy in 1952, he resided in Memphis, where he, Doug Poindexter, and future Elvis bassist Bill Black formed the country band, Starlite Wranglers. Subsequently, he became friends with Sam Phillips of the Memphis Recording Service, commonly referred to as Sun Studios.

Moore was introduced to Elvis Presley via Phillips at Sun Records. Moore ended up working with Presley for 14 years, even serving as his first manager in the beginning stages of Presley’s career. During the span of his illustrious career, Moore collaborated with Charlie Rich, Jerry Lee Lewis, Tommy James, and Ringo Starr.

Moore was inducted into the Rock and Roll Hall of Fame in 2000, the Musicians Hall of Fame in 2006, and elected to the Memphis Music Hall of Fame last October. Due to failing health, Moore was unable to attend the ceremony at the Cannon Center and Rolling Stones guitaristKeith Richards accepted the award on his behalf.

“I started out on an acoustic guitar, then I heard Scotty Moore and I went electric,” said Richards. “He opened up avenues musically in the way he worked with (bassist) Bill Black, and Elvis, of course. That was the kick-off for me and a lot of guys.”

Moore was named as one of the 50 greatest guitarist of all-time by Rolling Stone magazine, at number 29.

Billy Idol tweeted: “Not many guitarists in R&R were as original and as inventive as Scotty Moore RIP.”

David Morrissey tweeted: “Thank you Scotty Moore. One of the all time greats. RIP.

Billy Ray Cyrus tweeted: “RIP Scotty Moore. You will be deeply missed. One thing’s for sure… the King is rockin in Heaven tonight!!”

Wheeler Walker, Jr. tweeted: “Scotty Moore changed the world with his guitar. RIP to one of the greats.”

Charlie Daniels tweeted: “Scotty Moore played some of the most famous guitar licks ever on Elvis’ early records. Scotty passed away today Rest in peace Buddy”

Here is a 2007 interview of Scotty Moore, talking about the Sun Sessions.