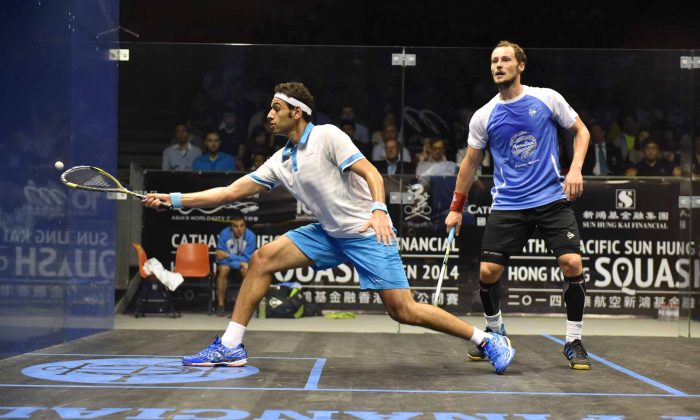 Mohamed Elshorbagy of Egypt plays a forehand volley during his match against Gregory Gaultier of France during the Final of the Hong Kong Squash Open 2014 at the HKPSC on Sunday Aug 31, 2014. Elshorbagy won the match 3 games to 2. (Bill Cox/Epoch Times)
Hong Kong

It was a tough physical and mental match with many claims of unfair play, lots of interaction between the players themselves, and between the players and the Match Referee. Referee decisions were frequently questioned and a strong hand was needed to get players to return to play. At times the war on words became intrusive to the match and the Referee gave stern warnings to the players on a number of occasions. Both players seemed to take the intrusions in their stride and as “just part of the game”.

The match comprised long energy sapping rallies intermingled with some amazing point winning shots in what was generally a high standard encounter. El Shorbagy came back from 1-5 down in the first game to take the lead at 6-5, Gaultier progressed to 8-6, but Elshorbagy levelled the score at 9-9 before taking the game 11-9 on a controversial interference, no let decision. The second game was all Elshorbagy who won it 11-2 in convincing style with Gaultier making several uncharacteristic errors. But Gaultier settled into the match and took the next 2-games 11-4, 11-8 setting up a tense 5th game decider.

Midway through Game-5 with Gaultier 0-6 down, Gaultier appeared to slip mid-court, fell to the floor and after some medical attention got up clutching his right calf. Gaultier was awarded a 15 minute, self inflicted injury break, but in the event only required 7-minutes to recover. After the break Gaultier picked up a few points, but lost the final game 11-4. The final score was 11-9, 11-2, 4-11, 8-11, 11-4 to Elshorbagy.