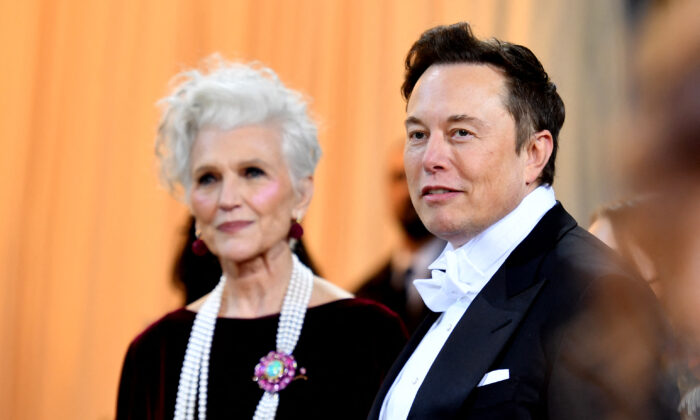 CEO, and chief engineer at SpaceX Elon Musk and his mother, supermodel Maye Musk, arrive for the 2022 Met Gala at the Metropolitan Museum of Art in New York, on May 2, 2022. (Angela Weiss/AFP via Getty Images)
Media & Big Tech

Maye Musk, the mother of Elon Musk, criticized a recent New York Times article targeting her son after it claimed that Musk grew up detached from apartheid-era atrocities in South Africa.

Published Thursday, the NY Times alleged that Musk had “white privilege,” grew up in South Africa’s white communities, and was sheltered from the segregation and propaganda that was pushed by South Africa’s government at that time. It came about a week after Musk, who has described himself as a “free speech absolutist,” and Twitter announced that he would purchase the social media company for $44 billion.

The article included interviews with Musk’s old classmates, including one named Melanie Cheary who claimed that “we were really clueless as white South African teenagers. Really clueless.”

His mother, a former model, criticized the paper for suggesting Musk, who left South Africa when he was 17, could have done something about the apartheid-era government’s policies. The apartheid government lasted between 1948 and 1990.

Last month, days after the Twitter deal was announced, Elon Musk wrote that he was being attacked primarily by leftists and left-wing organizations due to his pro-free speech stance.

The Tesla CEO and world’s richest person had said that attacks against his character were “coming thick and fast” but mostly “from the left, which is no surprise.”

“However I should be clear that the right will probably be a little unhappy too,” Musk said on Twitter. “My goal is to maximize area under the curve of total human happiness, which means the ~80% of people in the middle.”

The group jointly wrote in their letter to the firms that “as top advertisers on Twitter, your brand risks association with a platform amplifying hate, extremism, health misinformation, and conspiracy theorists.” It continued,” Under Musk’s management, Twitter risks becoming a cesspool of misinformation, with your brand attached, polluting our information ecosystem in a time where trust in institutions and news media is already at an all-time low.”

Although Twitter and Musk announced that he would buy the company and take it private, it’s not clear when the deal will be finalized. Twitter CEO Parag Agrawal and other company executives are still in charge of the firm’s operations.