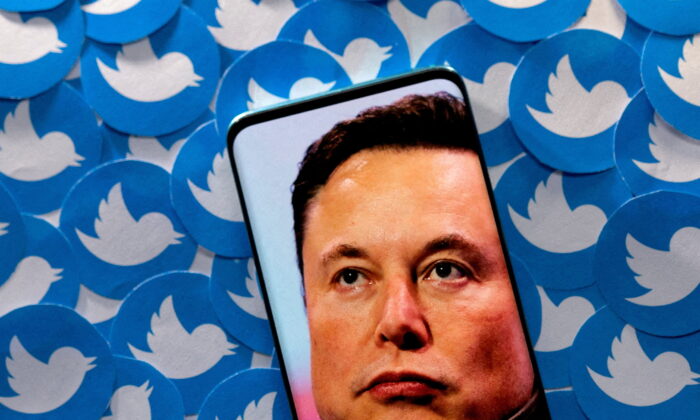 An image of Elon Musk is seen on smartphone placed on printed Twitter logos in this picture illustration taken on April 28, 2022. (Dado Ruvic/Illustration/Reuters)
Business & Markets

Tech entrepreneur Elon Musk has subpoenaed a Twitter whistleblower who recently made explosive claims that the social media company misled regulators about security and lied to Musk about the number of spam bots on the platform.

Court filings show that Musk has subpoenaed Peiter Zatko, Twitter’s former security chief, who made a series of bombshell allegations in a disclosure filed in July with federal regulators (pdf), including the assertion that Twitter was “lying about bots to Elon Musk.”

Musk and Twitter are squaring off in court over the Tesla CEO’s attempt to walk away from his $44 billion takeover bid for the company. Key to Musk’s backing out of the deal is his claim that Twitter’s longstanding position that spam accounts and bots make up fewer than 5 percent of monetizable daily users is false.

The disclosure by Zatko, who also is known by his hacker handle “Mudge,” includes the allegation that the true number of spam accounts and bots on Twitter is probably “meaningfully higher” than the 5 percent the social media firm claims.

The whistleblower also alleged that Twitter executives have “little or no personal incentive” to accurately count the number of bots and that “deliberate ignorance was the norm.”

Twitter not only had difficulty accurately measuring the number of automated accounts on the platform but executives also had “no appetite” to carry out proper measurements because, as Zatko claims in the disclosure, “they were concerned that if accurate measurements ever became public, it would harm the image and valuation of the company.”

There has been speculation that Zatko’s disclosure—and now his potential testimony—could give Musk’s legal team more ammunition in their legal battle against the company.

Twitter officials didn’t respond by press time to a request by The Epoch Times for comment on Zatko’s claims; the company has repeatedly insisted that its 5 percent spam bot estimate is accurate.

Twitter CEO Parag Agrawal has dismissed Zatko’s allegations in a message to staff as a “false narrative that is riddled with inconsistencies and inaccuracies, and presented without important context.”

“We will pursue all paths to defend our integrity as a company and set the record straight,” he wrote in the message.

Musk and Twitter are poised to go to trial in October in a Delaware court, with experts saying the whistleblower’s claims could give Musk a leg up in the court fight.

Besides claiming Twitter lied about spam bots, Zatko also accuses the company of “extreme egregious deficiencies” in the way it handled user information, further alleging that the company had falsely claimed to federal regulators that it had a solid security plan.

Zatko’s disclosure also claims that Twitter had difficulty identifying—much less restricting—the presence of foreign agents on its platform, while asserting that Chinese entities gave money to Twitter, raising concerns that these entities could access sensitive information about Twitter users.

His complaint also claims Twitter experienced server vulnerabilities, alleging that more than 50 percent of Twitter’s 500,000 data center servers had kernels or operating systems that were noncompliant and many had problems with encryption.

Besides dismissing Zatko’s claims as inaccurate, a Twitter spokesperson told Reuters that Zatko was fired after about 14 months at Twitter for “ineffective leadership and poor performance.”

The spokesperson added that Zatko’s assertions appeared to be designed to capture attention and inflict harm on Twitter, its customers, and its shareholders.

This week, the Senate Judiciary Committee is set to hear testimony from Zatko, “who will appear pursuant to a subpoena and whose recent disclosure alleges serious privacy and security failures by the company,” the committee wrote in a post on Twitter.