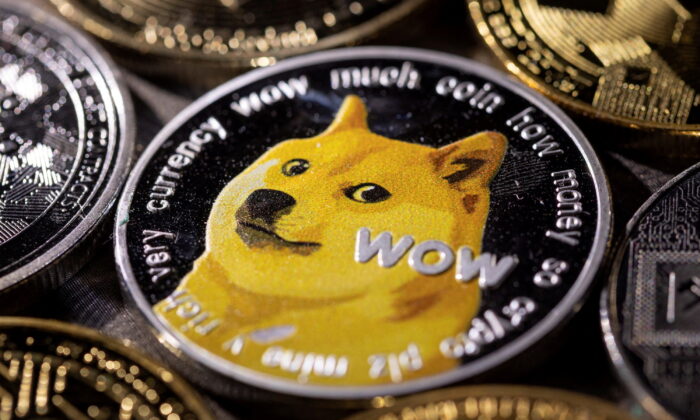 Representation of cryptocurrency Dogecoin is seen in this illustration taken on Nov. 29, 2021. (Dado Ruvic/Illustration/Reuters)
Cryptocurrency

Dogecoin prices surged about 8 percent on Tuesday after billionaire CEO Elon Musk reiterated his support for cryptocurrency Dogecoin in a recent interview.

Speaking with Bloomberg News Editor-in-Chief John Micklethwait at this year’s Qatar Economic Forum in Doha, Musk explained his reasoning behind his public endorsement of the digital currency.

“I intend to personally support Dogecoin, because I just know a lot of people who are not that wealthy who have encouraged me to buy and support Dogecoin—so I’m responding to those people,” Musk said, adding that it was his employees around the Tesla and SpaceX factories who requested that he champion Dogecoin in the public square.

This is the second time in recent days that the Tesla Motors and SpaceX CEO remarked on Dogecoin, writing in a tweet on Sunday that “I will keep supporting Dogecoin.”

Earlier this year, Musk confirmed that the electric vehicle maker and spacecraft manufacturer would accept Dogecoin as a method of payment for some merchandise.

Dogecoin had skyrocketed to 74 cents leading up to Musk’s guest appearance on Saturday Night Live. When he labeled it as a “hustle,” Dogecoin endured an immense selloff and it has been unable to recover since, plummeting below 5 cents year-to-date, Dogecoin is down nearly 63 percent.

Last week, Musk and his companies were sued for $86 billion in compensatory damages and $172 billion in treble damages by a Dogecoin investor, alleging that he ran a pyramid scheme to support cryptocurrency, according to a complaint filed in federal court in Manhattan.

“Defendants were aware since 2019 that Dogecoin had no value yet promoted Dogecoin to profit from its trading,” the lawsuit said. “Musk used his pedestal as World’s Richest man to operate and manipulate the Dogecoin Pyramid Scheme for profit, exposure, and amusement.”

Keith Johnson accused Musk, Tesla, and SpaceX of racketeering for endorsing Dogecoin, jacking up the token’s price, and then letting its value crash. As a result, Johnson is seeking $86 billion in damages and wants to block Musk and his corporations from touting Dogecoin. He is also looking for a judge to determine that investing in Dogecoin is gambling under federal and New York law.

In recent months, there has been a flurry of crypto-related lawsuits, including cases against high-profile individuals.

Many of these cases involve the complainants arguing that these tokens are pump-and-dump schemes designed to deceive investors.

“[S]ocial media influencers are routinely paid by scammers to help them pump and dump new tokens on the back of pure speculation. Some influencers promote coins that turn out simply not to exist at all,” said Charles Randell, the chair of the UK Financial Conduct Authority (FCA), in a fall speech to the Cambridge International Symposium on Economic Crime.

Naoshad Pochkhanawala, a financial planner at Amiko Benefits, an investment solutions firm, contends that legal pump-and-dump schemes are prevalent in the crypto sphere “because unregulated markets are, shockingly, unregulated.”

“Dogecoin was as viable a currency as tulips and Beanie Babies,” Pochkhanawala told The Epoch Times.

“The concept of blockchains being currencies by virtue of a grand mutual delusion though, that is now truly challenged. They [cryptocurrencies] will sprout up like weeds in good economic times and collapse like the Ponzi schemes when they are in bad. And those who distribute them will profit. Many will get lucky, they will mistake luck for skill and keep the myth going. Most though will just lose.”

The entire cryptocurrency market has cratered this year, wiping out approximately $2 trillion since hitting a peak in November 2021. The crypto market cap is now around $950 billion.

Year-to-date, Bitcoin has plunged 55 percent, Ethereum has declined close to 70 percent, Cardano has lost 63 percent, and Litecoin has declined more than 64 percent.

During the market selloff, there has been plenty of analysis discussing the sector’s future. While the consensus is that the crypto market is here to stay, some purport that there is a type of rebalancing unfolding, whereby the virtual tokens with utility will survive and thrive, and the joke coins will tumble.

In other words, this is a healthy downturn for an industry that has been historically volatile.

But what about Dogecoin?

Proponents assert that Dogecoin could have a healthy future because it can serve as a tool for micropayments and, if Twitter is officially run by Musk, it could serve as a payments mechanism on the social media outlet. In addition, Dogecoin block time is about ten times faster than Bitcoin.

But “there’s pretty much nothing in Dogecoin that serious investors may find appealing,” says Stefan Ristic, a crypto author and the owner of BitcoinMiningSoftware.com.

“However, we may say that certain investors find it interesting during hype times and trending markets, which are the times when you can make a profit. So even though there’s no real value in it, an investor with proper risk management may trade it when there’s a high risk-reward ratio,” Ristic told The Epoch Times.

“As crypto markets get more mature, I expect coins like Dogecoin and Shiba Inu to become history. But at the end of the day, it’s people who run the market prices with their opinion, so no one can say for sure.”

An internet meme of a Shiba Inu dog inspired the creation of Dogecoin in 2013. But IBM software engineer Billy Markus and Adobe software engineer Jackson Palmer also had the objective of creating a peer-to-peer virtual currency that could generate a broader audience than Bitcoin.

During the ultra-bull run last year, Palmer, who had been open about his disinterest in the overall cryptocurrency industry, wrote in a tweet in July 2021 that he would never return to the space.

“Despite claims of ‘decentralization,’ the cryptocurrency industry is controlled by a powerful cartel of wealthy figures who, with time, have evolved to incorporate many of the same institutions tied to the existing centralized financial system they supposedly set out to replace,” he wrote.

Many investors have tried to piggyback off of Dogecoin’s success by launching clones, including DogeFi, Kishu Inu, DogeSwap, and snoop doge.

Looking ahead, Frank Corva, a senior analyst at Finder, a financial services firm, thinks Dogecoin has more room to retreat if Musk does not fully utilize the digital token.

“In the crypto’s nine years of existence, DOGE has been pumped and dumped many times,” he told The Epoch Times. “If Musk doesn’t do something substantial with Dogecoin – like put it on one of his company’s balance sheets – then its price will likely continue to retreat along with the price of most other altcoins until the next bull market rolls around and speculators start pounding the drum to pump it up again.”