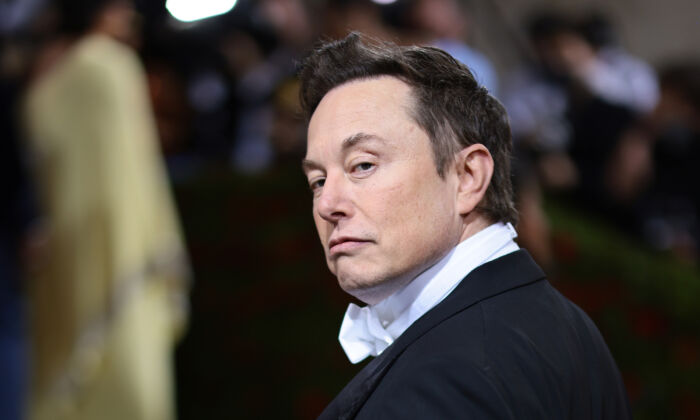 Elon Musk attends The 2022 Met Gala Celebrating "In America: An Anthology of Fashion" at The Metropolitan Museum of Art in New York on May 2, 2022. (Dimitrios Kambouris/Getty Images for The Met Museum/Vogue)
Media & Big Tech

Elon Musk said Twitter could become an accurate and relevant news source just like an “old-school version of The Economist” or Comedy Central’s “The Daily Show” when it was hosted by Jon Stewart.

A Twitter thread Sunday night raised speculation that Musk was preparing to take over the firm. The billionaire tech mogul, who said in July that he no longer sought to purchase the social media platform over concerns about its spam bots, is facing a lawsuit from Twitter to force him to complete the acquisition for $44 billion, or $54.20 a share, an agreement that both parties entered into on April 25.

“It sure is hard to find a news source that’s accurate, relevant & not totally depressing!” Musk wrote on July 31. “Old-school version of The Economist & Jon Stewart Daily Show/Colbert Report were great.”

Musk said on May 2 that he would like to rid the platform of bots and scams and make Twitter software available for public review. He believed at least 20 percent of Twitter’s daily active users are fake or spam accounts. Twitter said in May the actual figure was fewer than 5 percent but was allegedly unwilling to show proof. The company later called such fake account claims a distraction and said Musk was bound by contract to close the then-agreed deal.

Now embroiled in a legal back-and-forth, the Tesla CEO filed a counterclaim against Twitter in the Delaware Court of Chancery on July 28, after the social media company sued the billionaire for abandoning the takeover deal. Judge Kathaleen McCormick, who is overseeing the lawsuit, ordered the five-day trial to begin on Oct. 17.

Meanwhile, Musk hit out at the press for reporting news about his private life in a bid to attract interest.

“The media has strong negative bias & are driven by clicks [they can’t help it],” Musk wrote in response to a fan comment late Sunday. “Unfortunately, I generate lots of clicks. But these things move in cycles. When it starts boring readers to knock me down, they will build me up,” he continued.

Last week, Musk denied an alleged brief affair with Nicole Shanahan, the wife of Google co-founder Sergey Brin, after a Wall Street Journal report alleged the CEO had prompted the billionaire to file for divorce from Shanahan. The report, published on July 24 and citing unnamed sources, further claimed Musk got down on one knee and begged Brin for forgiveness.

“This is total [nonsense],” Musk wrote on Twitter soon after the article was posted on the platform. “Sergey and I are friends and were at a party together last night.” He also posted a photo of himself and Brin from a day earlier, apparently taken at a party.