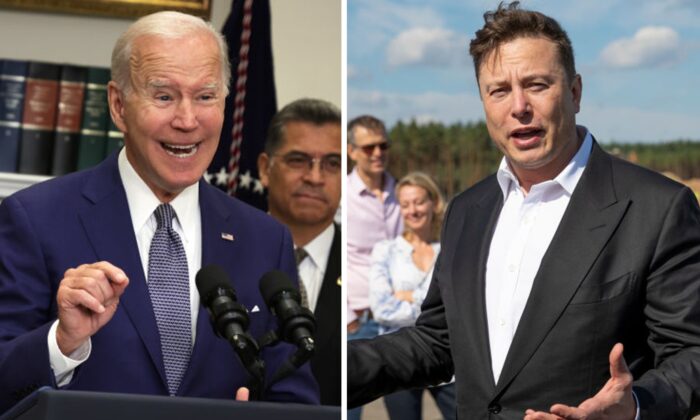 'Whoever controls the teleprompter is the real President!' the billionaire wrote
By Gary Bai

Elon Musk has weighed in on a video of President Joe Biden reading what appears to be a teleprompter instruction line during a live announcement on Friday.

Biden was addressing the nation over an executive order related to the reversal of Roe v. Wade when he seemingly went too far by reading out directions—”End of quote. Repeat the line.”—from the teleprompter.

“Whoever controls the teleprompter is the real President!,” Musk wrote on Twitter in response, adding a picture that shows a dialogue from Will Ferrell’s 2004 movie “Anchorman,” in which Ferrell is cast as television anchor Ron Burgundy.

“Who typed a question mark on the Teleprompter? For the last time, anything you put on that prompter, Burgundy will read,” reads the picture quote Musk posted on the social media platform.

Whoever controls the teleprompter is the real President! pic.twitter.com/1rcqmwLe9S

Musk was reacting to a post by digital strategist Greg Price, which referenced the CBS news footage showing Biden apparently misreading the teleprompter.

“Joe Biden accidentally reads the part on the teleprompter that says ‘repeat the line’ when they wanted him to say the line again [expletive],” said Price.

“No. He said, ‘let me repeat that line,'” said Simons, denying that Biden was reading teleprompter instructions.

This isn’t the first time that the richest person in the world has suggested a person other than Biden is the de facto president.

Musk’s comment on Friday likewise piles onto a series of criticisms against the president and the Democratic Party.

While the billionaire did not reveal who he believes is the “real” commander-in-chief, he commented on the prevailing influence of labor unions over the party currently in charge.

“The general public is not aware of the degree to which unions control the Democratic Party. One does not need to speculate on this point,” Musk told interviewers from the Tesla Owners Silicon Valley in June in a sit-down discussion, justifying his belief by citing how the United Auto Workers allegedly was able to “exclude” Tesla from an electric-vehicle summit at the White House.