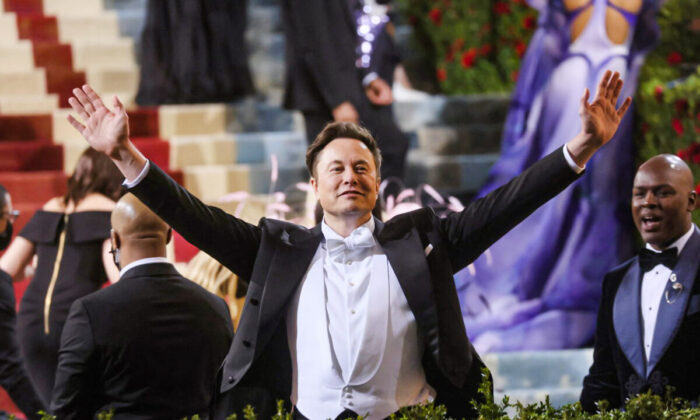 Elon Musk arrives at the In America: An Anthology of Fashion themed Met Gala at the Metropolitan Museum of Art in New York on May 2, 2022. (Brendan Mcdermid/Reuters)
Companies

Tech billionaire Elon Musk has secured fresh financing from a group of investors that includes a Saudi prince and Oracle co-founder Larry Ellison for his $44 billion buyout of Twitter, according to a new securities filing on May 5.

The world’s richest man received equity commitment letters from 19 investors, committing to pay $7.14 billion in cash or Twitter common stock (valued at $54.20 per share), according to the document.

The largest contribution came from Saudi Prince Alwaleed bin Talal, a billionaire and one of Twitter’s largest stockholders, with a $1.9 billion commitment, followed by Ellison, who agreed to invest $1 billion.

The Saudi prince initially dismissed Musk’s $54.2 per share offer, stating on Twitter that it didn’t reflect the true value of the company. But now, he’s prepared to contribute his 35 million Twitter shares to remain a stakeholder in the private corporation.

Some investors believe that investing in Twitter is betting on Musk’s management rather than the company’s performance. They feel rewarded by his track record as a founder and operator of businesses such as PayPal, Tesla, and SpaceX.

Musk is expected to serve as a temporary CEO of the platform for a few months following the completion of his takeover, according to people who spoke to CNBC’s David Faber.

Musk had secured $25.5 billion in loans, backed in part by a portion of his stake in Tesla, according to the announcement. He had also promised to provide nearly $21 billion in cash.

With the new money, the margin loan amount backed by Tesla shares will be reduced to $6.25 billion from $12.5 billion; the equity commitment has now increased to $27.25 billion from $21 billion, according to the filing.