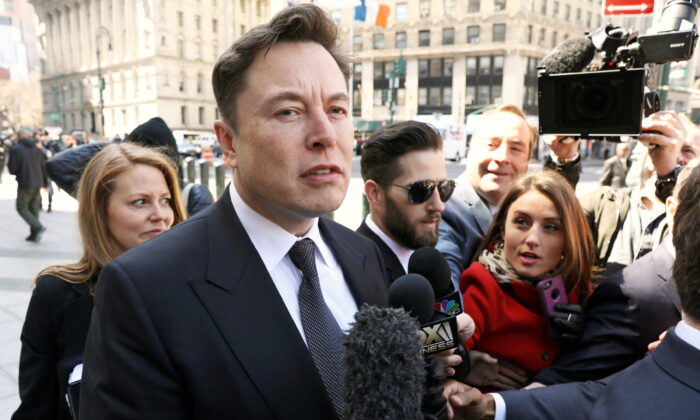 Tesla CEO Elon Musk arrives at Manhattan federal court for a hearing on his fraud settlement with the Securities and Exchange Commission (SEC) in New York on April 4, 2019. (Brendan McDermid/Reuters)
Media & Big Tech

Elon Musk has fired back at Twitter’s request for an expedited trial in a lawsuit that seeks to force the Tesla CEO to follow through with his bid to buy the social media giant for $44 billion.

The tech billionaire’s legal team alleged in a July 15 filing (pdf) in a Delaware court that Twitter is engaged in an “unjustifiable request to rush” the trial. A ruling that’s unfavorable to Musk could legally require him to execute his pledge to buy Twitter for $54.20 per share, or about 36 percent above current market value.

“Twitter’s sudden request for warp speed after two months of foot-dragging and obfuscation is its latest tactic to shroud the truth about spam accounts long enough to railroad Defendants into closing,” Musk’s lawyers wrote in the filing, opposing Twitter’s motion for an expedited four-day trial in September.

Lawyers representing Musk said that the question of bots or automated accounts on Twitter is “fundamental” to the case and that more time is needed for discovery.

Musk’s defense rests on the premise that the number of automated accounts, or bots, on Twitter is far greater than the 5 percent that the company has disclosed, representing a “material adverse effect” that justifies his backing out of the deal.

While Musk’s team wants the trial postponed to February at the earliest, Twitter has based its request for a speedier trial on the fact that the buyout agreement Musk signed with the company’s board expires on Oct. 24.

But Musk’s lawyers reject that reasoning, arguing in their filing that Twitter’s bid for “extreme expedition rests on the false premise” that the termination date is Oct. 24, “glossing over that this date is automatically stayed if either party files litigation.”

By filing its complaint, Twitter “has rendered its supposed need for a September trial moot,” they said.

Twitter’s lawsuit against Musk, filed on July 12 in Delaware’s Court of Chancery, seeks to compel him to follow through with the deal. In its 62-page complaint (pdf), Twitter alleges that Musk’s actions have hurt its business and stock price.

“Having mounted a public spectacle to put Twitter in play, and having proposed and then signed a seller-friendly merger agreement, Musk apparently believes that he—unlike every other party subject to Delaware contract law—is free to change his mind, trash the company, disrupt its operations, destroy stockholder value, and walk away,” Twitter said in the complaint.

Musk initially agreed to buy Twitter for $54.20 per share, which is about 36 percent above the current market price of $37.74 per share at the close of regular trading on July 15. The Tesla CEO has since moved to scuttle the deal, claiming in a U.S. Securities and Exchange Commission filing (pdf) that there are too many bots and automated accounts on the platform.

Twitter fired back, saying it would try to enforce the deal and hit Musk with a lawsuit.

“We are confident we will prevail in the Delaware Court of Chancery,” Bret Taylor, Twitter’s chairman, said in a July 8 social media post.

The lawsuit will get its first day before a judge within days, with a hearing already scheduled at the Delaware Court of Chancery, which has a long history of rulings in high-profile corporate litigation cases.

Judge Kathaleen McCormick, the chief judge of Delaware’s Court of Chancery, has set a 90-minute hearing on July 19 in Wilmington.

Twitter’s lawsuit against Musk drew a defiant reaction from the Tesla chief.

In a late-night Twitter post on July 10, Musk shared a meme featuring images of himself laughing, along with captions that marked several key developments in his buyout bid saga, including controversy over the number of bots on the platform.

The Tesla CEO has repeatedly challenged Twitter’s claim that bots make up less than 5 percent of the total accounts on the platform.

His legal team said in the July 8 SEC filing that Twitter has failed to give him sufficient access to its data to carry out his own analysis, while arguing that the company misrepresented its monetizable daily active user counts and so broke the terms of their agreement.

Musk also posted a meme featuring action star Chuck Norris, sitting behind a chess board, smiling even though his opponent has a crushing advantage in the number of chess pieces.

Musk’s single-word caption “Chuckmate” is a play on the word “checkmate,” a winning move in chess, suggesting that Musk thinks he’ll emerge victorious, even if the odds may be stacked against him.

Twitter, in its lawsuit, has argued that Musk has been well aware of the platform’s issue with bots.

The company also accused him of breaching the terms of the merger agreement, including not disparaging Twitter, pointing to some of Musk’s tweets that are critical of the company’s leadership.

Musk’s filing addressed this issue, accusing Twitter of having the “sense of humor of a bot.”

“Twitter claims that Musk is damaging the company with tweets like a Chuck Norris meme and a poop emoji,” the filing states.

Musk’s lawyers said, “Twitter ignores that Musk is its second-largest shareholder with a far greater economic stake than the entire Twitter board.”