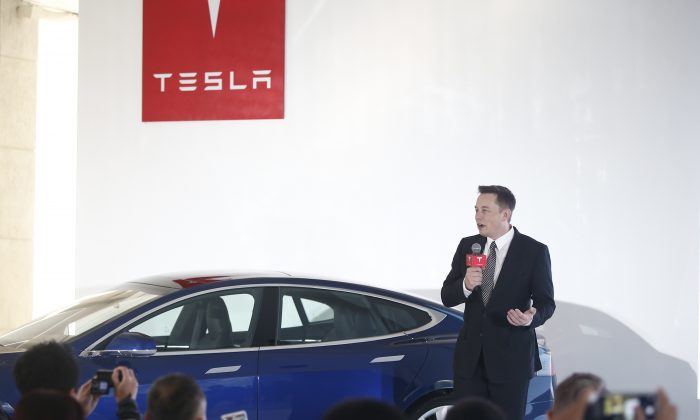 Elon Musk addresses a press conference to declare that the Tesla Motors releases v7.0 System in China on a limited basis for its Model S, which will enable self-driving features on October 23, 2015 in Beijing, China. (ChinaFotoPress/Getty Images)
Tech

Tesla founder and CEO Elon Musk reiterated his belief that Teslas will be able to make autonomous trips across the country within two years. He took the opportunity to say so in a press conference on Sunday, when new automatic parking features were announced for the Model S.

“I might be slightly optimistic on that, but I don’t think significantly optimistic that we can do that in two years,” Musk said at the press conference, reported Bloomberg, and expects it should be possible to have fully-self driving vehicles in the next 24 to 36 months.

Tesla has been progressively rolling out self-driving features for its Model S sedans. The 7.0 software update in October included a beta autopilot feature that could reliably steer on highways, but had kinks such occasionally veering off toward exit ramps, and required drivers to keep their hands on the wheel at all times.

In the 7.1 software updated released Saturday, Tesla introduced a self-parking feature called “Summon,” which is far from doubling as a valet—the Model S can only drive forwards and backwards straight in Summon mode—but can help cars squeeze into extremely narrow garages.

The update also introduced new restrictions for the autopilot feature, which will not longer be available when driving on residential roads and roads without a center divider, and the speed of the vehicle will be capped at 5 mph above the speed limit when in autopilot.

Musk had previously stated that autopilot would be self-improving as it gathered more data, and in the latest software update the tendency to veer off on exit lanes is said to be already fixed.