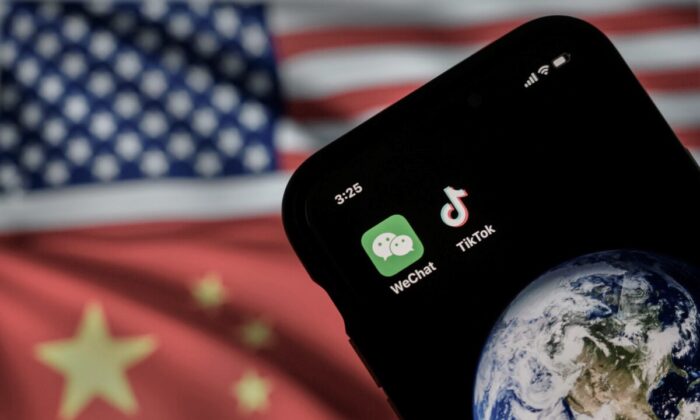 A mobile phone displaying the logos for Chinese apps WeChat and TikTok in front of a monitor showing the flags of the United States and China on an Internet page, in Beijing, on Sept. 22, 2020. (Kevin Frayer/Getty Images)
Defending America

Elon Musk recently questioned whether the short video app TikTok is leading to the collapse of civilization, following a new report that alleged the China-owned platform had obtained private U.S. user data.

“Is TikTok destroying civilization?” the billionaire said on June 17 via Twitter. “Some people think so,” his post reads, offering no further explanation.

The remarks came after leaked audio from more than 80 internal meetings showed employees of TikTok’s Beijing-based parent company ByteDance have “repeatedly accessed nonpublic data about U.S. TikTok users” in China, according to Buzzfeed. It said the recordings include 14 statements from nine employees who indicated engineers had access to U.S. user data “at the very least” for five months between September 2021 and January 2022.

Although the company has also previously claimed that it does not share user information with Beijing, and has a “world-renowned U.S.-based security team” to ​​decide who can access this data, evidence shows employees had to turn to colleagues in China to decide how user data would flow.

TikTok an ‘Invasive Tool’ for Beijing: Lawmakers Warn of Threat After Report Shows US Data Accessed in China

“U.S. staff did not have permission or knowledge of how to access the data on their own,” the Buzzfeed report reads, citing tape recordings. Shortly before, TikTok announced that it had completed migrating its American user data to U.S.-based servers at Oracle, a move that could address U.S. regulatory concerns over data integrity on the popular short video app.

Counting the United States as its largest market, TikTok has more than 1 billion active users globally. Washington has been scrutinizing app developers over the personal data they handle, especially when it involves U.S. military or intelligence personnel.

The company did not immediately respond to a request for comment.

Or perhaps social media in general

Musk later posted that perhaps it is “social media in general” that poses the risk to civilization.

He called censorship on Twitter a “civilization risk” in April. While negotiating a $44 billion buyout of Twitter, Musk has said his offer is about “the future of civilization,” not for profit.

The billionaire, who used to stay out of politics, has also declared his concerns over Twitter’s apparent left-wing political bias.

When asked on Twitter last month about his intentions in wading into political controversy, the founder and chief engineer of SpaceX mentioned “civilization” again, in the context of what he called “woke” progressive policies.

“Unless it is stopped, the woke mind virus will destroy civilization and humanity will never” reach Mars, Musk responded.