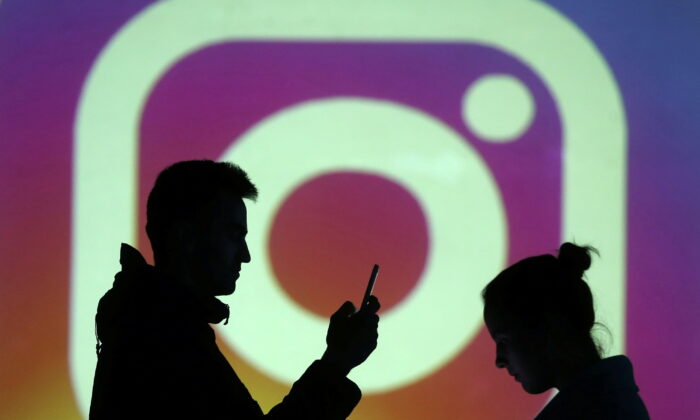 Silhouettes of mobile users are seen next to a screen projection of Instagram logo in this picture illustration taken on Mar. 28, 2018. (Reuters/Dado Ruvic/Illustration)
Social Media

Tesla CEO Elon Musk took aim at a major social media platform again, on Sept. 12, using Twitter to call out rival platform Instagram as an “envy amplifier,” echoing both his own previous remarks and the criticisms of other whistleblowers who have singled out Instagram as a uniquely toxic platform.

Musk directed his remarks in response to an unrelated clip posted by CEO Austen Allred (founder of the Lambda School), in which Berkshire Hathaway Vice Chairman Charlie Munger argues that envy, not greed, is the primary motivator of human activity.

“…[T]he fact that everyone’s five times better off than they used to be, they take it for granted,” Munger says in the clip. “All they think about is somebody else having more now, and [that] it’s not fair that he should have it and they don’t.”

“Instagram is an envy amplifer,” read Musks’s terse response to the clip.

Musk’s comment constitutes something of a non sequitur from Munger’s remarks, which do not explicitly address Instagram or social media in general. However, they are consistent with Musk’s own comments on the subject over the years, and the electric car tycoon has been particularly fervent in his criticisms of the adverse effects of the photo-sharing site.

“If you look at everyone on Instagram, you might think, ‘Man, there are all these happy, beautiful people, and I’m not that good looking and I’m not that happy, so I must suck,'” Musk said during his famous appearance on “The Joe Rogan Experience” in 2018.

Musk is not alone in targeting Instagram in particular, a platform which is emphatically popular with teenagers and young adults. The entrepreneur’s remarks echo the criticisms of Meta Platforms whistleblower Frances Haugen, whose multi-part series, “The Facebook Files,” includes an installment focusing on the adverse effects of Instagram on the mental health of teenage girls.

“For the past three years, Facebook has been conducting studies into how its photo-sharing app affects its millions of young users,” Haugen writes. “Repeatedly, the company’s researchers found that Instagram is harmful for a sizable percentage of them, most notably teenage girls.”

The whistleblower notes that many of Facebook’s internal research into the adverse mental health effects point to a problem unique to Instagram, which focuses on body and lifestyle posts that could be uniquely prone to stimulate envy and insecurity. This is in contrast to competitors such as Snapchat, which somewhat avoids similar problems by its ephemeral nature and emphasis on quirky filters, or TikTok, which prioritizes humor and content.

Musk has a long history of being outspoken about social media and its adverse effects on the individual and society. Perhaps the most notable instance of the Afrikaner entrepreneur’s interest in social media was his controversial bid to acquire Twitter, which he claimed had been undermined by partisan and restrictive moderation policies. Despite reaching an agreement to acquire the platform for $43 billion, Musk has attempted to renege on following through with the agreement, protesting that Twitter deceived him about the ubiquity of automated accounts or “bots” on the site.