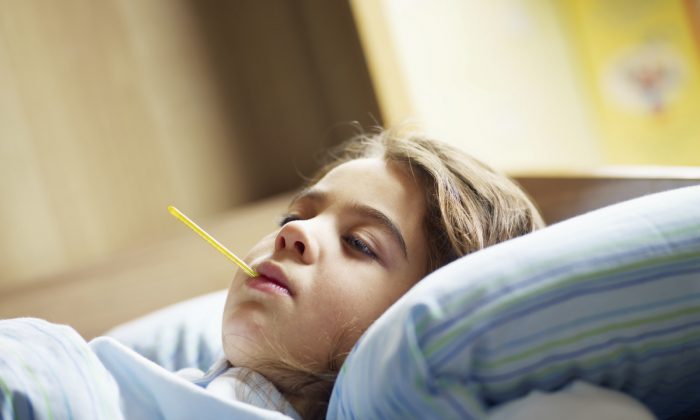 A sick girl in a file photo. (CharlieAJA/iStock)
US

MILWAUKEE—The source of a bacterial bloodstream infection linked to 18 deaths in Wisconsin remains a mystery, health officials said Thursday as a team of federal and state investigators worked to find a common thread among those sickened.

The federal Centers for Disease Control and Prevention sent five employees to Wisconsin to help the Department of Health Services pinpoint a link to those that have been infected by the bacteria, Elizabethkingia.

Forty-four people in southern and southeastern Wisconsin have tested positive for the infection, and all have serious underlying health conditions, state health officer Karen McKeown said. The majority of those sickened are over age 65 and none are children, she said.

At this point, the source of the infection remains elusive.

“We are keeping every possibility on the table,” McKeown said. “But, it does not seem to be from person to person” contact.

Interviews with those infected were being done by CDC and state investigators.

“What does their lives look like that could give us a clue as to where they came in contact with the bacteria?” McKeown asked out loud. Family members of those who died were also interviewed.

“Even as they’re grieving, they are providing information to help,” she said.

State health officials were first notified of six cases between Dec. 29, 2015 and Jan. 4, 2016, and alerted health care providers and laboratories statewide of the presence of the bacteria.

After the initial cases were reported and state health officials notified local partners, the number of cases began to grow steadily with one dating back to November 2015.

“We’ve seen an uptick because people are specifically looking for this,” McKeown said. Symptoms include fever, shortness of breath, chills or skin rash, health officials said.

The CDC said that although Elizabethkingia is a common organism in the environment, including water and soil, it rarely causes infections. A variety of potential sources, including healthcare products, water sources and the environment, was being tested, the CDC said, but none of these have been found to be a source of the bacteria.

Melissa Brower, a spokeswoman with the CDC, said in general, each state sees about five to 10 cases of the bacteria per year. A number of small, localized outbreaks have also been reported.