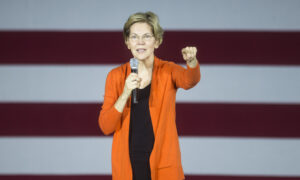 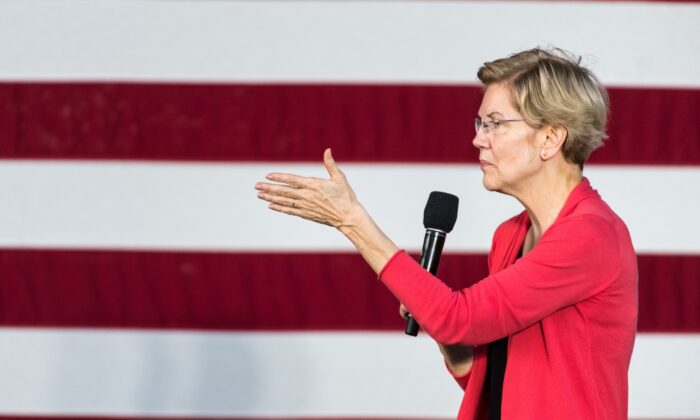 Elizabeth Warren Unveils $52 Trillion Medicare for All Plan, Including Trillions in New Taxes

Sen. Elizabeth Warren (D-Mass.) released her plan for how much a government takeover of the healthcare industry would cost as well as her proposals for how to pay for it.

Warren said her plan would cost about $52 trillion over 10 years and would provide insurance for every person in America.

“Everybody gets the doctors and the treatments they need, when they need them. No more restrictive provider networks, no more insurance companies denying coverage for prescribed treatments, and no more going broke over medical bills,” she wrote.

The money to fund the proposal would come from existing federal spending on Medicare and Medicaid; existing state spending on health insurance; and existing private-sector employer contributions.

“Here’s the main difference: Individual health care spending. Over the next ten years, individuals will spend $11 trillion on health care in the form of premiums, deductibles, copays, and out-of-pocket costs. Under my Medicare for All plan, that amount will drop from $11 trillion to practically zero,” Warren wrote.

That $11 trillion deficit will “largely” be made up with “new taxes on financial firms, giant corporations, and the top 1 percent—and making sure the rich stop evading the taxes we already have,” Warren claimed.

“That’s right: We don’t need to raise taxes on the middle class by one penny to finance Medicare for All.”

Some portion of the trillions going to individuals would ultimately go to the government, Warren noted, because there would be taxes applied to that money. She estimated approximately $1.15 trillion of the $11 trillion would be paid in taxes.

A major portion of the plan would switch employer healthcare spending to a new employer Medicare contribution, which Warren claims will actually save companies billions of dollars over the next decade. Instead of sending money to private insurance companies, the employers would send the money to the federal government.

Warren acknowledged her plan might not end up obtaining all the money necessary to fund Medicare for All.

“If we’re falling short of the $8.8 trillion revenue target for the next ten years, we will make up lost revenue with a Supplemental Employer Medicare Contribution requirement for big companies with extremely high executive compensation and stock buyback rates,” she wrote.

The rest of the money for the $52-trillion plan would come from four sources, Warren claimed: “(1) better enforcement of our existing tax laws so we stop letting people evade their tax obligations; (2) targeted taxes on the financial sector, large corporations, and the top 1% of individuals; (3) my approach to immigration; and (4) shutting down a slush fund for defense spending.”

She proposed a new tax on financial transactions and a fee on big banks. She also said she’d force large corporations to pay taxes.

And, Warren said, she’d raise another $3 trillion by adding more to the tax burden on the top 1 percent of households in America, including a straight-up wealth tax and taxing capital gains income annually.