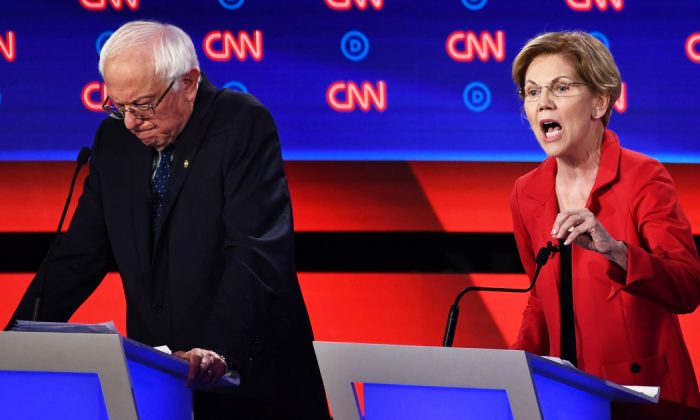 Democratic presidential hopeful US Senator from Massachusetts Elizabeth Warren (R) delivers her closing statement next to US senator from Vermont Bernie Sanders during the first round of the second Democratic primary debate of the 2020 presidential campaign season hosted by CNN at the Fox Theatre in Detroit, Mich., on July 30, 2019. (Brendan Smialowski/AFP/Getty Images)
Politics

Democratic presidential contender Sen. Elizabeth Warren (D-Mass.) said that she would not use nuclear weapons if she was elected president unless another country used one against America first.

“It reduces the likelihood that someone miscalculates, that someone misunderstands. our first responsibility is to keep ourselves safe,” she said on July 30 during the CNN debate, claiming President Donald Trump’s nuclear policies are unsafe.

“We should not be asking our military to be taking on jobs that do not have a military solution. We need to use our diplomatic tools, our economic tools,” she added.

Asked to respond by a moderator, Montana Gov. Steve Bullock said: “I wouldn’t want to take that off the table.”

Bullock said he hopes that the United States never has to use a nuclear missile but said that America can use its strength to force other countries to negotiate their nuclear armaments down.

“We don’t expand trust around the world by saying, you know, we might be the first ones to use a nuclear weapon. That puts the entire world at risk, and puts us at risk,” Warren said in part in response.

Bullock said he doesn’t want an American city to have to be sacrificed before taking action.

“When you actually have Korea, when you have others, I don’t want to turn around and say Detroit would have to be gone before we use that,” he said. “I don’t want them to think I can strike this country and I, and we, would not do a thing.”

No other candidates were asked about the issue.

Many candidates told the Council on Foreign Relations this week that they’d support re-entering the nuclear deal with Iran that was agreed upon by President Barack Obama and that President Donald Trump exited.

The lineups for each night were decided in a live, random draw. Candidates had to meet one of the following thresholds: receive at least 1 percent support in three polls from certain pollsters or receive campaign contributions from 65,000 unique donors, including 200 donors each from 20 different states.

Candidates who will not be in either of the debate nights include Rep. Seth Moulton (D-Mass.), Miramar, Florida Mayor Wayne Messam, billionaire investor and activist Tom Steyer, and former Rep. Joe Sestak (D-Pa.).