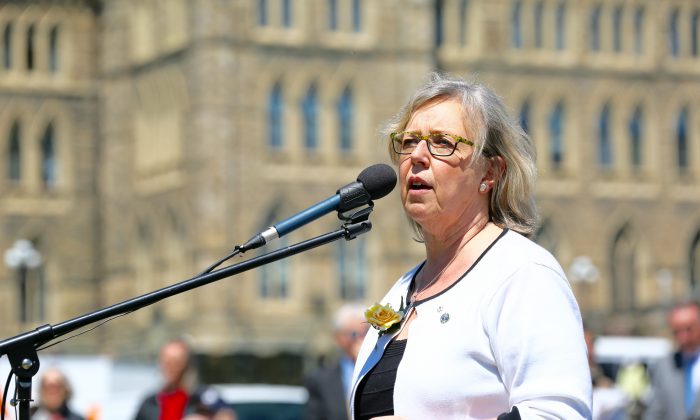 Elizabeth May Joins Green Leadership Race, Says Party Has Been in Disarray

Elizabeth May launched her bid to reclaim the leadership of the federal Green Party on Wednesday saying she wanted to rebuild the party and turn it into an influential political force, including on fighting climate change.

May, who quit as leader of the Greens in 2019, is running on a joint ticket with Jonathan Pedneault, an expert on crisis situations who has investigated abuses in war zones including Afghanistan.

Launching their campaign on Wednesday in Sidney, B.C., each pledged to appoint the other as deputy leader if they are announced as the winner, and both promised to get co-leadership enshrined in the party’s constitution.

May, one of two Green MPs sitting in the House of Commons, said the party “has been in disarray, and I bear some responsibility for this.”

“I have made mistakes and I apologize for them. The past two years have been hard on all of us,” she said.

Only two MPs representing the party won in the last federal election—May on Vancouver Island and Mike Morrice in Kitchener, Ont.—after a campaign beset by infighting and sniping at Annamie Paul, May’s successor as leader.

Paul quit after the election, saying the experience had been one of the worst in her life.

Amita Kuttner, an astrophysicist from Vancouver, took on the role as interim leader with a mission to “heal” the party.

They said the party still had work to do to “get its act together internally” and should be supportive of its MPs and next leader.

“To prove we are a serious party ready to govern, we must get our act together internally and align with our own values,” they said. “This requires good governance, functioning operations, and the leader and MPs being fully supported to do their jobs.”

Pedneault said he would take on the role of growing the party through fundraising and membership drives, and said he would not be “looking back.”

“The leadership race will be an attempt to show that the colour green is a positive colour,” he said.

He said he does not feel eclipsed by May, a well-established figure in Canadian politics, or “feel like a junior partner at all.”

“We are learning from each other,” he said in a joint interview with May.